A woman who wore a prosthetic penis and a tricked her blindfolded friend into having sex with her has been jailed for six-and-a-half years.

Gayle Newland, of Willaston, Cheshire, created a “disturbingly complex” online persona in which she pretended to be a man for more than two years.

The 27-year-old was found guilty at a retrial at Manchester Crown Court in June of committing sexual assault by penetration, using a prosthetic penis without her blindfolded victim’s consent.

Newland sobbed and slumped to the floor of the dock as sentence was handed down on Thursday.

The complainant said she was persuaded by Newland to wear a blindfold at all times when they met and only found out she was having sex with Newland when she finally took off her mask.

Newland claimed her accuser always knew she was pretending to be Kye Fortune – the Facebook profile she created at the age of 15 using an American man’s photographs and videos – as they engaged in role play while struggling with their sexuality.

She was originally jailed for eight years in November 2015, but the conviction was later quashed on the grounds that the trial judge’s summing up of the case was not fair and balanced.

She was handed an extra six months in jail for an offence of fraud committed between March 2014 and September 2015. 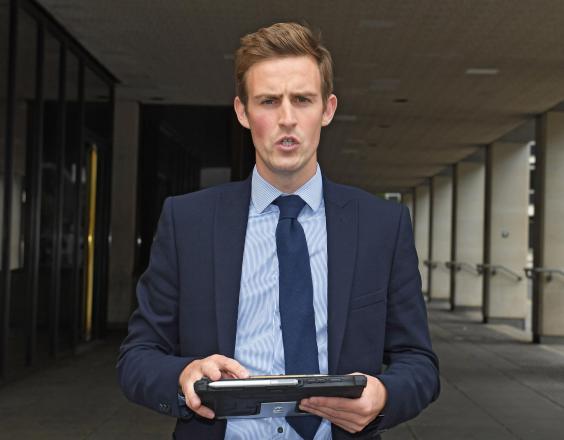 One of the women targeted by Newland, who cannot be named for legal reasons, continued to be deceived by Newland just days after police launched their investigation into the 2013 complaint

The judge said the incident showed “a chilling desire” on her part to control and manipulate the lives of others – although no offences took place.

The retrial jury was not told of the fraud conviction until it had returned its verdicts.

He said: “In order for the defendant to make the scam work for her, she needed to create the fake blogger profiles to fool the company’s directors into thinking that the person really existed and had really done the work.

“It was of sophisticated nature and involved significant planning.”

Newland’s barrister, Nigel Power QC, conceded it was “stupid offending” given that she was on bail at the time while police investigated the sexual allegations made against her.

Judge Stockdale told Newland: “You went to extraordinary lengths to manipulate (the complainant) and control her. Only when your control was absolute did you put your deceit to the ultimate test and allow a meeting to take place between her and the fictional Kye Fortune.

“Such was the desire for one-to-one contact with him that you had engendered she was willing to go to any lengths to meet him. Willing to wear a blindfold, willing to agree to not to look at him at all.

“She was willing to believe because she wanted to believe that Kye Fortune had a battery of health problems. She was desperate to be with Kye Fortune on your terms.”

Newland had denied concealing her gender and claimed both women were gay and struggling with their sexuality when they met and had sex.