Football superstar Cristiano Ronaldo has confirmed his girlfriend Georgina Rodriguez is pregnant with his fourth child following months of rumours.

The Real Madrid forward, 32, was asked by Spanish news outlet El Mundo whether he was “happy” to have another child on the way, he replied: “Yes, very much.”

It comes just weeks after he welcomed baby twins Eva Maria and Mateo on June 8, who were born via a surrogate mother.

He is also a father to seven-year-old Cristiano Ronaldo Jr, who was also born via a surrogate in California. 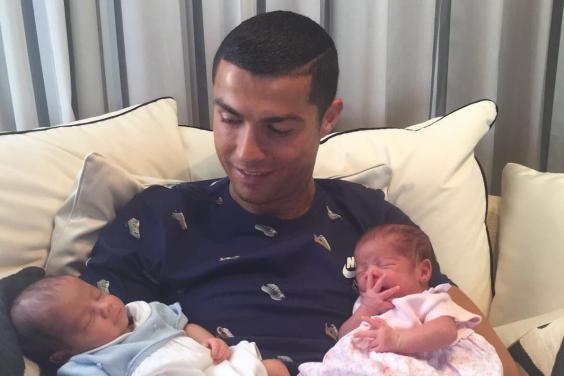 Ronaldo posted a picture of him holding his newborn twins (Twitter)

Georgina, 22, who is from the Spanish city Jaca and models for Madrid agency Uno Models, has been pictured sporting a small bump in recent months.

Proud Ronaldo also told El Mundo his newborn twins were “precious” and that he has a lot to learn about changing nappies.

When questioned about his nappy changing skills, he said: “I do not get on very well but I try.”

The couple are currently holidaying with Ronaldo’s family in Ibiza after he was given an extended pre-season break for his part in the Confederations Cup.

Portugal were knocked out of the cup on penalties.