A two-year-old boy is the latest victim of the Grenfell Tower blaze to be identified, his family said.

Jeremiah Deen died alongside his mother Zainab Deen, 32, when flames ripped through the 24-storey tower block in west London on June 14.

In an emotional tribute their family said: “You spent a moment in our arms, but you will last a lifetime in our hearts”.

The pair became trapped on the 14th floor of the building when fire broke out around 1am.

A firefighter made a desperate call to the mother hours later from her brother Francis Deen’s phone.

The 47-year-old previously told of how the firefighter passed the phone back and told him “tell her you love her”. 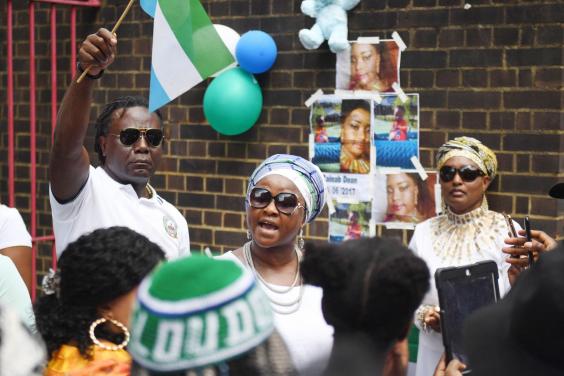 Friends of Ms Dean, who is originally from Sierra Leone. (PA)

A family statement released through the Met Police read: “We would like to express our heartfelt appreciation to all relatives and friends for their prayers, floral tributes and expression of condolences during this difficult time.

“Funeral arrangements will be announced later as plans are being made to lay mother and son to rest.

The inferno left at least 80 people dead and hundreds homeless.

So far 46 of the dead have been identified including stillborn baby boy Logan Gomes.