Lewis Hamilton said he gave back third position to team-mate Valtteri Bottas in Hungary because he “wants to win the title the right way”.

The Mercedes driver honoured a promise to let the Finn back past him on the last lap, after Bottas moved out of his way to let him attack the Ferraris.

“I don’t know whether it will come back to bite me in the backside,” he said.

However, Hamilton, who finished fourth, admitted it was “a grey area” given the gap he established to Bottas after passing him.

“If he let me by and I pulled him along and we were two seconds apart it is a much easier thing to let him back,” he said. “But I was seven seconds up ahead and with the Ferraris and the team were in a difficult position.

“But it showed I am a man of my word and also that I am a team player. I am just as much a part of the team as anyone in it. It shows unity.

The situation arose because after the single pit stops the Mercedes drivers were closing on the leading Ferraris.

Hamilton’s title rival Sebastian Vettel was leading but struggling with a problem with his car’s steering. Hamilton, meanwhile, was stuck behind Bottas and feeling he could go faster.

“I had a lot more pace than Valtteri but the radio didn’t work at the time so I couldn’t communicate with the team,” Hamilton said.

“I felt I had the pace to fight with the Ferraris. The radio started working and they gave Valtteri a few laps to try to catch the Ferraris which he wasn’t able to do. He was great to let me go.

“My thought process was: ‘If he lets me by and I can’t pull away from him then I will just let him back.’ But I had a lot more pace.”

Hamilton said it was “risky” to slow down on the last lap because he had to let lapped cars back past him and Bottas was under pressure from Red Bull’s Max Verstappen.

“I was thinking: ‘If I do the right thing here and lose a place and finish fifth it is going to really suck.’ But fortunately I managed it well and was able to do what was right.”

Mercedes’ strategy differed markedly from that of Ferrari, who used Kimi Raikkonen in second place as a buffer to protect Vettel even though the Finn was faster.

Hamilton’s decision to keep his word cost him three points in the championship and he trails Vettel by 14 points going into F1’s summer break. Bottas is 19 points behind Hamilton.

Team boss Toto Wolff said: “These values made us win six championships and will make us win more championships in the years to come. It cost us three points and it could potentially cost the championship and we are perfectly conscious about that.

“Nevertheless it is how the drivers and team operate. We stick to what we say and if the consequences are as much as losing the championship, we will take it.

“But long term we will win much more races and championships with that approach than doing it the other way around.”

However, Wolff admitted it had been “a tough call to make, a very difficult one, believe me probably the most difficult call we had to make in the last five years”.

He added: “I am not in a happy place at the moment but if you are not fast enough at least you are sportsmanlike.” 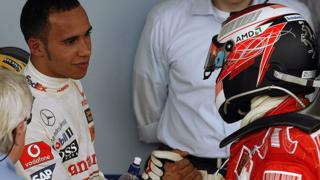 Close but no cigar. Lewis Hamilton missed out on a world title in his debut season in 2008 by one point to Kimi Raikkonen.