A youth was mowed down by a car as a hooded gang wielding metal poles brawled in a north London street.

Violence flared as a group of up to 10 youths fought in the street in Harrow on Sunday afternoon.

Shocking footage showed young men, who were dressed in black hooded tracksuits, dodging in and out of traffic during the brawl in Locket Road.

One of them was seen carrying a large wooden board in an apparent attempt to shield himself from any blows.

In the video, some of those involved crowd together before a silver Volkswagen car speeds along the road towards them.

Warning: This video might cause distress to some readers

The youths then tried to run away but one of them was hit and sent flying before the vehicle crashed to a halt, wedged between a hedge and a lamppost.

Some of the group then surrounded the car and struck the passenger side door with their weapons before fleeing the scene.

A young man got out of the vehicle and appeared to attack the youth lying on the ground behind the car before running along a side street.

Two police officers arrived at the scene as shocked passers-by gathered on the pavement. 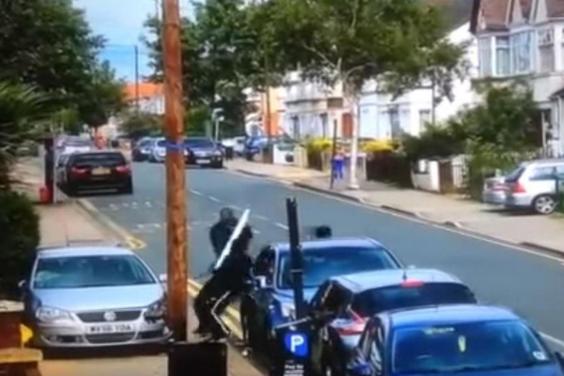 Scotland Yard confirmed officers were called to reports of a fight on Locket Road at about 4.10pm on Sunday and that a 22-year-old man was found injured.

He was taken to a west London hospital where he remained in a stable condition on Tuesday.

A Met Police spokesman said: “There has been no arrests.

Any witnesses or anyone with information is asked to call the police non-emergency line on 101.