This is the heartwarming moment a policewoman is proposed to by her girlfriend amid cheers at the Pride in London parade.

The British Transport Police (BTP) officer approaches her partner before she drops to one knee and pulls out a ring on Saturday afternoon.

In tear-jerking footage posted online, the couple then kiss and embrace to cheers and applause from revellers who descended on the capital for the event.

Social media users were quick to congratulate them after the video was posted on Twitter by BTP and has been shared more than 100 times. 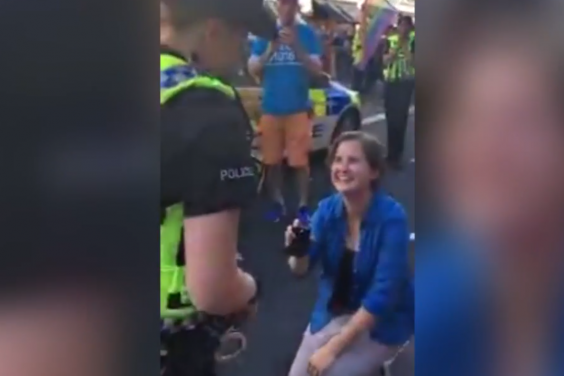 It comes after a number of proposals to and from emergency services workers were picture and filmed at last year’s parade in central London.

Last year, PC Adlem was taking part in the event when he broke away from colleagues and got down on one knee in what is thought to be one of the first public marriage proposals by a gay Met Police officer.

Heartwarming: PC Phil Adlem gets down on one knee to propose to partner Jonathan Sammons (Met LGBT Network)

The heartwarming moment sparked messages of support from across the world with London Mayor Sadiq Khan among those to congratulate the couple.

On the same afternoon, two uniformed Met police officers were captured celebrating their engagement following another surprise proposal at Pride.