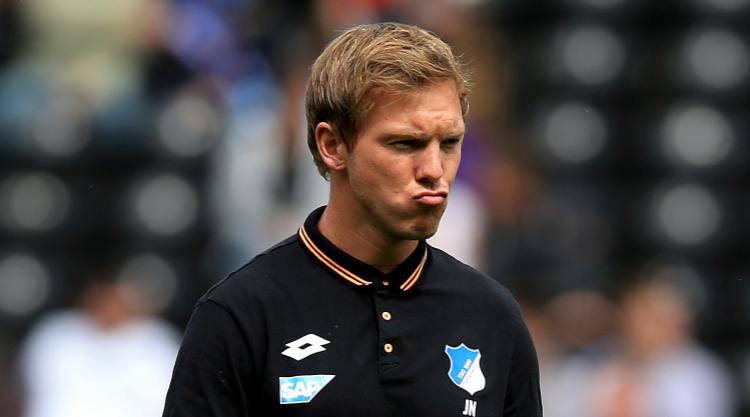 Hoffenheim coach Julian Nagelsmann insists his side can shock Liverpool in their Champions League play-off first leg but will need a top performance to achieve it.

The 30-year-old has been something of a revelation in Germany, guiding the club to the brink of their first appearance in the Champions League after finishing fourth in the Bundesliga.

Liverpool start as favourites in Germany but Nagelsmann has warned his side should not be taken lightly.

Asked if they could cause an upset he said: “Absolutely. I am aware of that.

“Of course we know Liverpool is the favourite in this encounter and we know we can, with a good match, shock our opponent.

“I don’t know if we need to shock them or the English public but I can also say we need an absolutely top performance tomorrow in order to do that.”

Despite his confidence and the general feeling surrounding the club’s first foray among Europe’s elite Nagelsmann offered a word of caution.

“Everyone is really excited. But to talk about a dreama dream can quickly become a nightmare and that depends on the result.”

Nagelsmann and Klopp share the same agent and the pair have spoken about this tie when the draw was made.

“We talked shortly, exchanged a few texts and both mentioned it is Murphy’s Law we are meeting in this match,” he said.

“For our advisor it is a good thing to work for both of us.”

The Hoffenheim coach insists he takes no pleasure from the news Liverpool’s key trio Philippe Coutinho, Adam Lallana and Daniel Sturridge will be absent with injury.

“I never wish anything bad to any opponent so I never sit in front of my TV celebrating when an opponent gets injured,” he added.

“If Coutinho and Lallana are in the team it doesn’t get easier for us but I don’t wish injuries on anyone.”