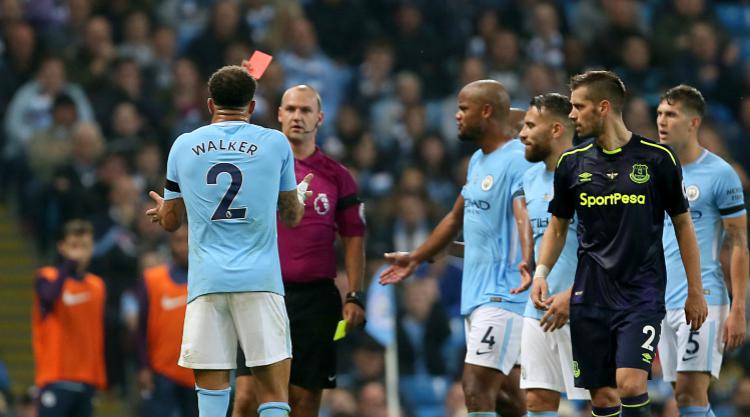 Kyle Walker had a home debut to forget for Manchester City on Monday night as he was sent off before half-time.

The £50million summer signing from Tottenham picked up his first yellow card in the 42nd minute – not long after Wayne Rooney had put Everton ahead – for a foul on visiting defender Leighton Baines.

Then, just two minutes later, the England full-back was heading for an early bath after being cautioned a second time, this time following a collision with Dominic Calvert-Lewin under a high ball.

City managed to escape with a draw thanks to Raheem Sterling’s late equaliser, but it was an evening Walker will not look back on fondly.

Here Press Association Sport looks at some other home debuts of players which did not go to plan.

The England international’s nightmare start to life at Real Madrid in 2005 is one of the most well-known. More than a year after arriving from Newcastle in a £13.4million deal – injury delaying his debut – Woodgate scored a spectacular own goal and was then sent off against Athletic Bilbao. Fortunately for the defender, his side still won 3-1.

A summer signing from Melbourne Victory, the Australian goalkeeper’s first match for Norwich proved his last. Theoklitos saw seven goals fly past him as Colchester won the 2009/10 season opener 7-1 at Carrow Road.

Who can forget George Weah’s cousin? Graeme Souness took a phone call purporting to be from the former World Player of the Year (it wasn’t) and Dia made his Premier League debut just days later, replacing Southampton great Matthew Le Tissier. So bad was his display that he was brought off with five minutes remaining of the 2-0 defeat to Leeds.

Cole was a big-name arrival at Liverpool during the summer of 2010 after being released by Chelsea but, like Walker, his league debut did not even last until half-time. He was sent off for a reckless challenge on Arsenal defender Laurent Koscielny in first-half stoppage time in the August 15 encounter at Anfield. Koscielny, making his Gunners debut, was also later sent for a second bookable offence in the 1-1 draw.

Awarded his debut for his fine form at Wolves, the striker’s transition to international football did not go to plan in 2008. Iwelumo could have made a dream start to life as Scotland international, but instead his open-goal miss in the 0-0 draw at Hampden with Norway will always follow him.

Handed his debut in a League Cup tie with Birmingham in 1997, he came on in extra time and was sent off for a high tackle 33 seconds later. Crowe’s career never really recovered.