This is the shocking moment a man was hurled into the air and trampled by bulls on live television during Spain’s Running of the Bulls festival.

Dramatic footage shows the man being dragged briefly along the ground after being rammed by one of the bulls during the annual run in Pamplona.

He lays motionless while the herd continue to charge through the Spanish city’s streets, trampling over him as they go, on the second day of the event on Saturday.

It comes after two Americans and a Spaniard were gored during the first running on Friday. 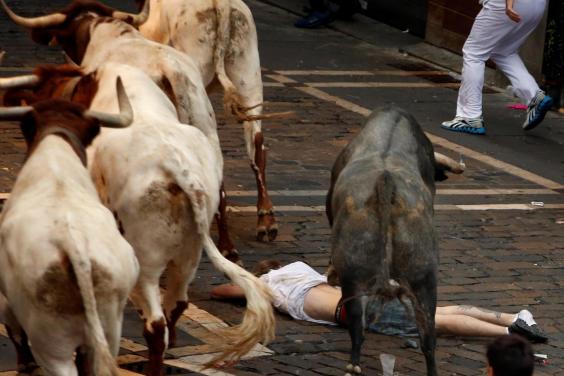 Pamplona: The man was rammed by the bulls before being trampled on (REUTERS)

All three were rushed to hospital and treated for not life-threatening injuries.

Televised images show a bull thrusting its horn into a man’s bottom before tossing him into the street.

Another man’s arm was impaled and he was dragged before the bull flings him off.

The nine-day San Fermin fiesta attracts tens of thousands of partygoers from Spain and all over the world.

It was made famous by Ernest Hemingway’s 1926 novel “The Sun Also Rises.”