Property prices in London crept up by just half a per cent this year.

The national average house price is now £304,000. The UK-wide property market grew by about one per cent.

One estate agent said buyers from the Continent were put off by uncertainty over post-Brexit immigration status and the necessity for large deposits.

London remained the most-searched area by buyers or window-shoppers. Its most-viewed properties were a £3.95 million four-bedroom maisonette in Kensington, a 391 sq ft Chelsea studio on sale for £895,000 and a seven-bedroom, seven-bathroom, semi-detached house with a wine cellar and swimming pool for £8.5 million in Earls Court Road.

Zoopla’s figures show Wandsworth suffered the biggest fall in values with a drop of more than three per cent, from about £797,000 to £769,000.

Owners in Southwark, Lambeth, Greenwich and Hammersmith and Fulham also saw the value of their homes decrease. 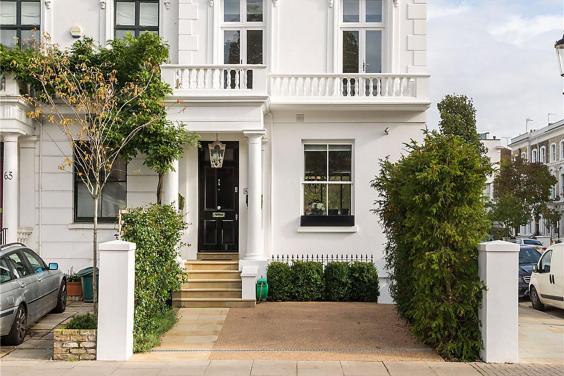 Dreaming on: among the most-viewed London properties were this £8.5 million mansion in Earls Court Road

Among boroughs bucking the trend was Camden. Prices rose by almost five per cent. Merton, the City, Islington and Enfield also had increases above the national average.

Zoopla based its estimates on analysis of its user data, such as valuations and nearby sales, and Land Registry sold prices between January 1 and July 1.

David Gape, the owner of Southwark-based Independent London, said: “Half of potential buyers would be European and they’re not going to risk their capital on a large deposit until they know whether they’re going to be able to stay. Brexit has been a major contributor in the slowdown of the sales market.”

Russell Quirk, founder of online agents eMoov, agreed that “uncertain times” were affecting the market. Rightmove data shows that last year the average sold price for a London flat was £518,500. Terrace houses sold for £650,000 and semi-detached homes for £637,000.