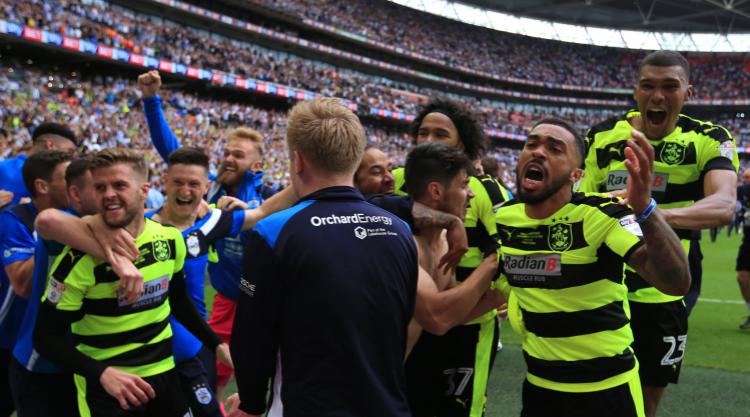 Huddersfield are back in the top flight after 45 years, clinching Premier League football and a Â£170million windfall by beating Reading on penalties in the Championship play-off final.

Few backed these sides to be challenging for promotion at the start of the campaign, with David Wagner’s men considered to be in for a relegation fight as the Royals started anew under Jaap Stam.

Both teams have had memorable campaigns but Reading’s has ended in heartache, whereas Huddersfield can look forward to life in the Premier League after securing a 4-3 penalty shootout triumph after 120 goalless minutes at Wembley.

The Terriers faced an uphill battle after fans’ favourite Michael Hefele missed his spot-kick, only for Liam Moore to blaze over and Danny Ward – the shootout hero in the semi-final at Sheffield Wednesday – to save Jordan Obita’s penalty.

Christopher Schindler stepped up to send Huddersfield into the top flight for the first time since 1972, leading to wild celebrations on the field and in the stands.

It could have been so much easier had Hefele and Izzy Brown not wasted early opportunities as a breathless start made way for a forgettable final.

However, Huddersfield will not care a jot after winning the shootout and writing an exciting new chapter in their history.

A remarkable din welcomed the teams at Wembley, where pyrotechnics and fan mosaics made way for a minute’s silence in tribute to those impacted by Monday’s Manchester terror attack.

The roar returned for kick-off and Huddersfield came close to ratcheting it up several notches during a start as bright as their fluorescent shirts.

Hefele lost his man in the box but could only direct Aaron Mooy’s free-kick wide, with Brown going closer still in the 10th minute.

Elias Kachunga ended fine play down the right with a low shot that the on-loan Chelsea attacking midfielder met at the far post, only to inexplicably turn wide.

Lewis Grabban immediately responded with a superb curling effort from 25 yards, but the entertaining start was not the precursor to an action-packed match.

Play was tense and stretched as Reading settled, with chances at a premium in a first half in which neither side mustered so much as a shot on target.

John Swift and Joey van den Berg failed with wayward attempts as Huddersfield’s final ball let them down, although the teams returned from the break with renewed vigour.

Huddersfield’s Chris Lowe got away the afternoon’s first shot on target 45 seconds into the second half, before goalkeeper Ward kept out Swift’s threatening drive at the other end.

Again, though, the intensity quickly dropped off as both sides remained compact defensively and lacked attacking spark.

After a particularly tense period in which Huddersfield fans’ favourite Hefele had a penalty appeal ignored, Mooy’s fine play brought a rare chance that substitute Collin Quaner could only bundle wide.

Hefele threw himself in front of a Chris Gunter cross as Reading attacked towards the end of regulation time, only for a low-key end to the match to slow further as Town captain Tommy Smith left the field on a stretcher.

Still defences sat deep and soaked up pressure, with Wagner turning to Kasey Palmer after 113 days sidelined by a hamstring complaint.

Reading substitute Garath McCleary missed from 30 yards, but came closer from the edge of the box with a low shot just wide as the first period of extra time came to an end.

Quaner’s drive was deflected behind for a corner when play resumed and calls for Jonathan Hogg to receive a second booking were overlooked as tension grew.

Wells came close after a fine Huddersfield break in the 116th minute and a Lowe free-kick just evaded team-mates as the match went to penalties.

Yann Kermorgant and Danny Williams scored to sandwich Lowe’s successful spot-kick before Hefele was denied by Ali Al-Habsi, who took a step forward during the stuttering run-up.

Liam Kelly and Wells scored before Moore blazed his penalty over and after s tar turn Mooy made it 3-3, the Huddersfield faithful were soon cheering again as Obita was denied by Ward.

Schindler stepped up and slotted home the decisive penalty, securing promotion and his place in Huddersfield folklore.

As for Reading, it was a record-equalling fourth play-off final defeat.