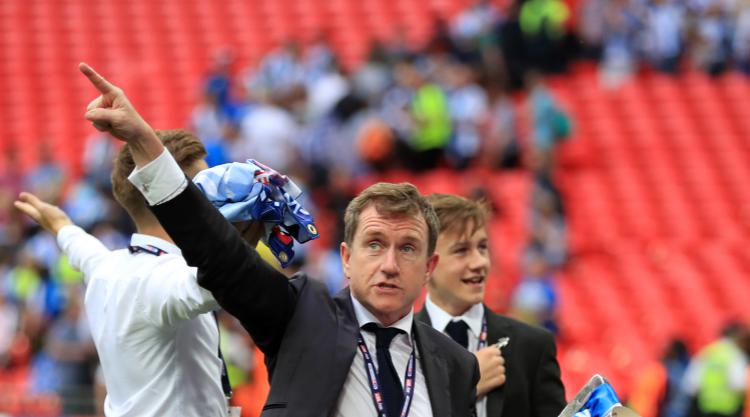 Huddersfield chairman Dean Hoyle says dreams can come true after his club won a fairytale promotion to the Premier League.

The Terriers returned to the top flight for the first time in 45 years after a penalty shoot-out win in the Sky Bet Championship play-off final against Reading capped off an amazing season.

They were tipped to be among the division’s strugglers but, under David Wagner’s revolution, they exceeded all expectations and deservedly earned their place in the big time.

The Wembley finale was far from a spectacle, but a drab 120 goalless minutes was followed by a memorable shoot-out, even if Hoyle could not bring himself to watch.

“I can’t believe it, it’s a dream come true,” Hoyle said. “We are there competing on the big stage.

“What we have achieved this season is unbelievable, there’s been great team spirit, I am emotional.

“It just proves that you don’t have to blow your brains to get promoted, you can do it the right way and we have done it.

“When I took over in 2009 it has got harder and harder every year, we are competing with some real big boys.

“But today has proved with an open mind it can be achieved, though I never thought it would be possible. It proves dreams can come true.”

This Roy-of-the-Rovers style story is reward for Hoyle’s left-field managerial pick in choosing Wagner to replace Chris Powell back in 2016.

Better known for being on Jurgen Klopp’s coaching staff at Borussia Dortmund, the 45-year-old has proved an inspired selection.

Hoyle has already had to fend off suitors, but promotion means it will be easier to keep his manager at the John Smith’s Stadium.

“I have had to fight hard to keep him, but he won’t be leaving Huddersfield now.”

The West Yorkshire club will be early favourites for relegation in their debut Premier League season, but Hoyle is only looking up.

“There has been lots of preparation going on behind the scenes,” he added. “We will take it head on and the financial rewards we get now are off the scale. It is happy days.

“The fans, the manager and players and everyone who works at the club; this means so much. I am fortunate to achieve some good things in my life but this is the best.

“Our wage bill is small but the heart, the desire and will to win is massive.

“It will be an interesting and a challenge. We will be favourites to finish bottom but people thought that this year. It might be the Champions League next year.”