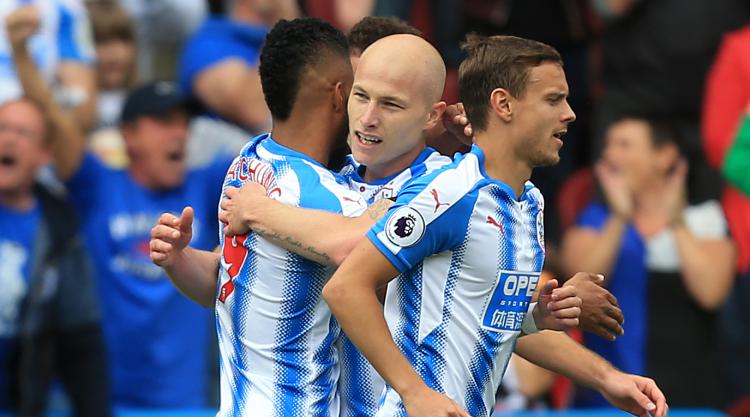 David Wagner did not expect Huddersfield to have a 100 per cent record after two Premier League games, even after his experience of achieving the improbable at the John Smith’s Stadium last season.

The Terriers became just the third side in Premier League history to win their first two games following promotion, emulating Bolton in 2001 and Hull last season, as Aaron Mooy’s terrific 50th-minute effort earned them a 1-0 home victory over Newcastle eight days on from their 3-0 triumph at Crystal Palace.

And winning the first top-flight game they had hosted in 45 years provided a continuation of the elation felt around that part of Yorkshire following May’s Wembley play-off final victory.

“I don’t have to pinch myself but I didn’t expect it,” Wagner said of his team’s start.

“But it’s football, if someone knows that in football everything is possible then it’s me and our club after what we’ve seen and felt last season.

“We only wanted to be brave in every single game, to search for our chance, and I think we’ve done it so far. Of course we are over the moon with six points in the two opening games, two clean sheets and I think these points were deserved, it’s what makes it even bigger.”

It was Australian Mooy who decided the contest with a rifled finish from the edge of the box after a one-two with Elias Kachunga.

The 26-year-old had spent last season with Huddersfield on loan from Manchester City and was one of Wagner’s top transfer targets as he made the arrangement permanent this summer.

“He doesn’t really say much, doesn’t smile a lot, he’s very calm but he is for sure very happy and very proud as well, and I think he deserves all the credit for his goal,” Wagner added.

“He’s a great technical footballer with such unbelievable working attitude. This is why I love this player.

“He was one of our priorities. We were in a lot of talks during the play-offs. We asked, ‘What happens if we get promoted?’ And he always gave us a sign that he was open to stay. He likes this football club, dressing room and his role in our team.”

While Huddersfield have built on the euphoria that surrounded last year’s promotion, that joy has already evaporated for another of the sides that came up with them.

Newcastle are yet to score or pick up a point in their opening two fixtures and this result and performance emphasised why Rafael Benitez is so keen to acquire more signings before the window closes.

“My experience in the Premier League is that you have to take your chances because if you make mistakes you will pay for that,” said the Spaniard.

“It’s maybe because it’s a learning process so we have to learn quickly, maybe it’s too soon for us.”

Asked if that process would take longer than people expect, he replied: “Yes, for sure.”

The Magpies scored 85 league goals last term, 29 more than their hosts, but rarely tested Jonas Lossl on Sunday even after introducing Joselu for a debut from the bench.

Sunday’s newspapers carried suggestions West Ham’s Andy Carroll could be a target to return to his boyhood club on loan, though Benitez was unable to confirm whether anything was imminent.

“There’s no news, I haven’t read the newspapers, we have to wait,” he said.

“Obviously we are working behind the scenes trying to do things but I don’t know which is our position at the moment.”