A vast blue whale skeleton that will form the main exhibit in the Natural History Museum is to be unveiled by David Attenborough.

The Duchess of Cambridge, a patron of the museum, will also join Mr Attenborough for the unveiling of the 25-metre long skeleton in the revamped Hintze Hall.

The huge marine mammal has replaced the much-loved Doplodocus dinosaur ‘Dippy’, which first went on display in the museum in 1979.

It came after 14,000 people signed a petition to stop the move to dismantle the dinosaur and install the whale, which will be revealed on Thursday. 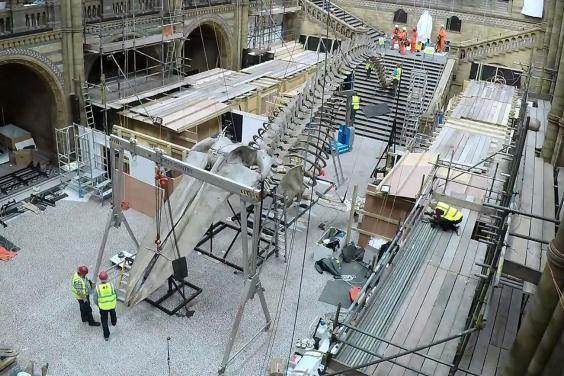 The Duchess will also tour Hintze Hall’s 10 other new displays chosen from the museum’s collection of more than 80 million specimens.

Hintze Hall will reopen to the public on Friday following six months of refurbishment, and its displays will include a dinosaur fossil – an 120 million-year-old Mantellisaurus, found on the Isle of Wight in 1917.

After coming close to extinction, the animal became protected under international law in 1966, after which its population slowly began to increase.