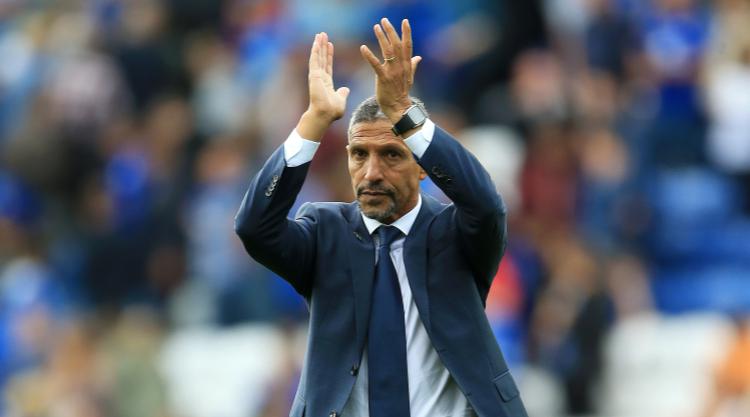 Chris Hughton believes Brighton’s attacking ability will determine their fate this season following a difficult to start to life in the Premier League.

Albion have suffered back-to-back defeats in their opening two top-flight games and failed to score against either Manchester City and Leicester.

The Seagulls strengthened their front-line on Thursday after club-record signing Jose Izquierdo was granted international clearance to complete his move from Club Brugge, while FC Zurich’s Ghanaian forward Raphael Dwamena, who is waiting for a work permit, should come in next week.

Boss Hughton takes his side to Watford on Saturday and knows they must begin finding the back of the net regularly if they are to stay in the division.

“The big difference at this level is the quality of finishing, the difference in creative ability and that’s what wins you games,” Hughton said.

“We can finish this season maybe happy with what we’ve done defensively as a side but it’s going to be what we’re able to do offensively that gets us where we want to be.

“That’s why we have recruited what we have in recent weeks and we will continue to try and do so.”

Colombia winger Izquierdo, who cost a reported a Â£13.5million, is expected to make his debut at Vicarage Road.

Hughton has already been impressed with the 25-year-old – both on and off the training ground – and believes he can give the Seagulls’ squad a boost.

“We have spoken about what he can give us on the football pitch, but he’s certainly somebody that can come in and get on with the players straight away,” Hughton added.

“He’s got a very, very good personality and, credit to him, his English is very good and self-taught.

“(He is) somebody that went from Colombia to Belgium and decided that he wanted to learn English over a period of time and managed to do that so I think that shows something about the lad.

“He’s settled in very well and, of course, we had him here for a period of time, even before the work permit was agreed, so it seems like he’s been around for a little while now.”

Hughton will, however, have to wait until after the international break to field 21-year-old Dwamena, subject to the transfer being completed.

The former Newcastle, Birmingham and Norwich boss also wants more new signings, although he is unsure if that will be a possibility.

“The honest answer is I don’t know,” he said. “We are still working very hard and we still want to strengthen the squad so it can be the best that it can come the end of the window.

“It’s okay saying what you would like to do but doing it can be very difficult.”