An 82-year-old widow today told how she thought she was going to die in a brutal assault on her doorstep by a woman who stole just £60.

Retired carer Catherine Smith was pushed to the ground, beaten, and strangled with her dog lead by the stranger who had followed her home in south London.

She said she was knocked out and needed stitches to lacerations to the back of her head as deep as her skull as she “fought for her life”.

Her attacker, a woman believed to be in her 30s, had forced her way into Mrs Smith’s home of 40 years after waiting outside for her victim to arrive on her mobility scooter in Streatham Hill at about 1pm on Thursday.

The grandmother-of-three believes she had been followed by the woman, who spotted her walking her Jack Russell, Katie, in a nearby nature garden. 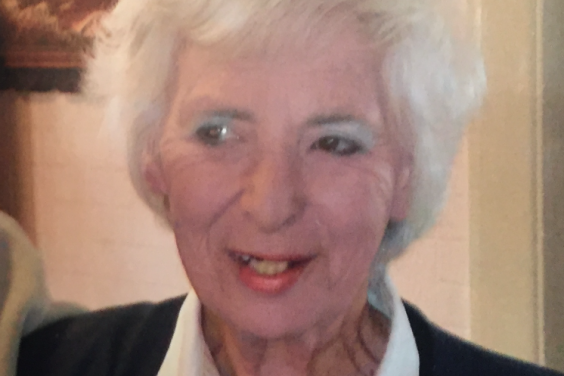 Catherine West pictured before the attack

She told the Standard she thought she would have been killed if she did not fight back during the ordeal in Lydhurst Avenue, a picturesque street where scenes from the Keira Knightley film Atonement were filmed.

Mrs Smith, who has severe arthritis, said the attack took place soon after the woman, who had her hood up and was sitting on the garden wall, approached her. When Mrs Smith asked her if she was looking for someone, the woman said “where’s Tracey?” and repeatedly asked for money.

The mother-of-three parked up her mobility scooter and as she went inside the woman said: “Can I come inside?”, but Mrs Smith refused. Her attacker forced her way into Mrs Smith’s home, sending her tumbling to the ground as she pushed the door back.

Mrs Smith said: “I went flying back into the stairs. I thought ‘oh my god’ what is happening?’ and I fought back.  We grappled inside, I was just grabbing out, hitting out at her. The woman was shouting at me saying, ‘give me your money. Give me a tenner’.”

“She took my dog lead and put it round my neck. She was pulling tight and I was struggling to breath, I thought, I’m going to die here. I just fought for my life with all my strength and I managed to get free.

“I was screaming for help. I’m not sure what happened next, but I think she knocked me unconscious by hitting me over the head with the charger for my mobility scooter.”

Her attacker is then believed to have gone upstairs and taken £61 which Mrs Smith had left out for her shopping.

Builders working nearby rushed to her aid and called police.

Mrs Smith, who worked for 33 years as a carer for the elderly, including with Lambeth Council, was taken to St George’s Hospital, and treated for wounds. Her face was badly bruised.

“It’s the first time I’ve ever been to hospital. I had all my children at home,” she said. “I’m shaken up now but I’m going to keep going out, I refuse to let this change me.”

Her son Mike, 54, a lorry driver from west London, said: “It’s disgusting. What kind of a person almost kills a kind, elderly woman for just a few quid. There was blood all over the stairs. We just want her caught.”

The suspect is described as a black woman, about 5ft 5ins tall, of slim build, with slicked-back black hair. She was wearing a khaki coloured zipped coat, multi-coloured trainers and leggings.

Detective Constable Vicky Vincent, the investigating officer from Lambeth CID, said: “This was a vicious unprovoked attack on an elderly vulnerable woman’s own doorstep. The attack has left her very distressed.

“We believe the suspect spotted Catherine in Palace Road Nature Gardens and for unknown reasons decided to follow her home, harass her and then brutally assault her.

“We would encourage anyone with information or any witnesses to contact us as a matter of urgency so we can bring the person responsible for this heinous crime to justice.”