Nicholas Burton was asleep in his 19th-floor flat in Grenfell Tower when he was woken shortly after 1am by three loud bangs on his door. He opened it and saw nobody there — but thick black smoke poured into his home.

He slammed the door, wedged a wet towel under it and roused his wife, Maria Del Pilar Burton, known as Pily, who suffers from a debilitating long-term illness.

Nicholas, 50, was calm. Born in North Kensington, he was raised in Ladbroke Grove, playing football with local lads Dennis Wise and Les Ferdinand.

He had lived in the tower for 33 years and knew the instructions to “stay in your flat in the event of fire”.

When his friend, Simon Jolly, who lives in an adjacent block, called to say the tower was on fire and begged him to get out, Nicholas told him: “I can’t — Pily is too frail to make it through the smoke and I can’t carry her down 38 flights.” 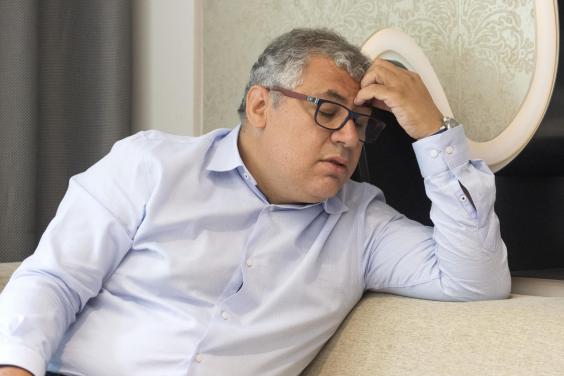 Burton was asleep in his 19th-floor flat in Grenfell Tower when he was woken shortly after 1am by three loud bangs on his door. (Evening Standard / eyevine)

From his window Nicholas, a retired catering services manager, saw fire engines and ambulances arriving far below — but he couldn’t yet see the fire. Simon kept calling, getting more and more distressed. “The whole building’s on fire, leave now!” he yelled. Nicholas twice phoned the fire brigade, who twice told him: “Stay in your flat, we know you are there.”

He got his wife dressed and put three wet towels in the bath — for Pily, himself and his best friend, a beagle named Lewis Hamilton II who he walked every day.

By now Nicholas was feeling apprehensive. “I looked out and saw people screaming and cars stopping on the highway to look,” he said. “Simon called repeatedly, pleading, ‘Please, please, leave now!’ I saw the glow of the fire light up the night and, next thing, I saw flames leap past our window. Simon had eyes on the blaze spreading towards our corner flat and yelled, ‘Get out of your bedroom now, go to your living room.’

“Then he shouted, ‘Get out of your living room.’ We shut ourselves in the bathroom with Lewis and waited for the fire brigade to save us.”

Trapped, they sat on the edge of the bath for more than an hour. “Time passed very slowly,” said Nicholas. Suddenly, at about 3.30am, he heard voices outside so he banged on the door. A firefighter with breathing apparatus shouted, ‘We know you are there, we’re just checking your neighbour.’

“I heard a bang as they kicked in the neighbour’s door and then they were shouting to us, ‘Put a wet towel over your head, we’re coming for you.’ I stood my wife up, put a towel on her head and one on Lewis’s back and opened the door. I couldn’t see anybody. Next thing an arm came out of the smoke and grabbed my wife. I shouted, ‘I’ve got my dog here as well.’ Someone said, ‘No, let’s go.’ I looked at Lewis. He looked at me. And then an officer’s arm came for me and we were off into the blackness. 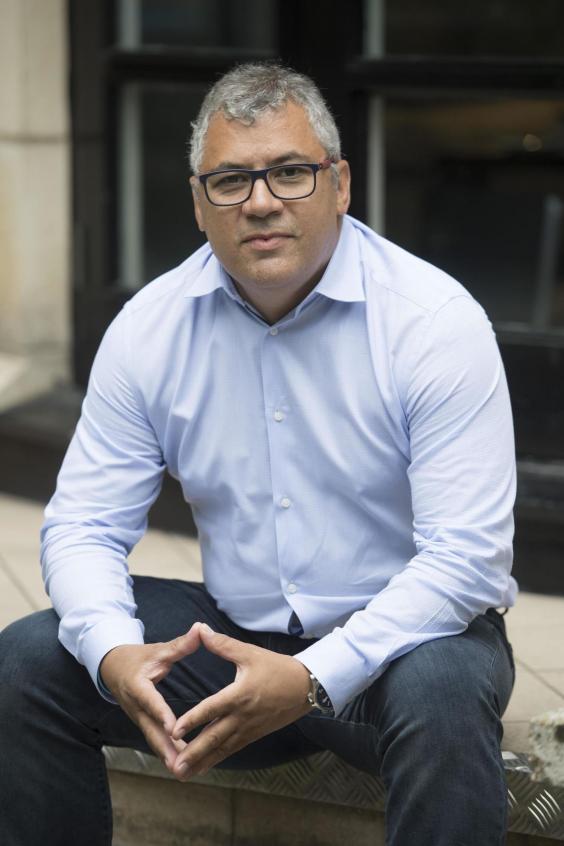 Burton was among the last to be saved from the Grenfell Tower inferno. (Evening Standard / eyevine)

“I grabbed my wife by the waist as we ran but I lost her and started screaming, ‘Where’s my wife?’ Someone yelled, ‘We’ve got her.’ An officer had my arm in a tight grip and as we got into the stairwell he was shouting, ‘Let’s go, let’s go!’ My eyes were open but I couldn’t see a thing. I was stepping on things which I later realised were probably bodies. He kept shouting, ‘You can do it, nearly there, you can make it’, over and over.

“Down and down we went, running at pace. I desperately needed air, but every time I tried to breathe my lungs filled with smoke. My throat was burning. I stuffed the wet towel in my mouth and tried to breathe through it. I was holding the banister for balance but as we descended it got hotter and hotter until I had to let go.

“The fire officer was still shouting encouragement, ‘Not far now, you gonna make it’, but I began to fade. I thought, ‘Oh my days, this is it, I can’t breathe, my legs are going. I started to pass out. I heard the words ‘nearly there’ but I was barely conscious.

“And then, I don’t know what happened, but next thing we came into the light and I was bent over, sucking oxygen into my lungs, convulsing, coughing up soot.”

They had reached the foyer. Nicholas was handed to another firefighter who shouted, “Let’s get out of the building”, but he insisted on waiting for his wife, so they left him in the atrium. “I waited for what seemed an age but nobody came out of the stairwell and I started to fear the worst. Then I saw Pily being carried by four fire officers, one on each limb. Apart from her T-shirt, they had cut off all her clothes. I threw my towel over her to cover her modesty and followed them as they ran past. There was no life in her. I thought she was dead. I was crying and in shock.”

Outside it was raining debris and  Nicholas was led to safety by an officer holding a riot shield above his head. A paramedic rushed him across the grass towards triage. “I still hadn’t seen the tower. I turned around just the once and saw that the whole building was on fire. It’s a sight I will never forget. That was when the full horror of what we had escaped hit me.”

They put him on the green mat (designated for “walking wounded”)  and he thought he saw them lay Pily on the red mat (“requires immediate life support”) and begin to work on her with CPR. “But I must have been confused because it was a man who I later heard didn’t make it,” he said. “I was desolate. Then a nurse said, ‘Sir, is this your wife?’ And she brought her over.

“We sat and held each other and cried. She was very weak. Then I stood up and my head started spinning. They put an oxygen mask on me. When I looked around I couldn’t see Pily and started panicking. ‘They’ve taken her to Chelsea and Westminster Hospital A&E,’ they told me. Then they put me in an ambulance and took me there, too.”

But Nicholas’s ordeal wasn’t over. At hospital, there was no sign of Pily. That day newspapers reported Pily as “among the missing”. Nicholas was desperate. He begged hospital staff to “keep looking”. Twelve sleepless hours later he got a call to say his wife was alive and had been taken to the Royal Free in Hampstead.

Six weeks on and Nicholas still has coughing fits that leave him dizzy and doubled over during our four-hour meeting, his first press interview. We sat in the lounge of the Crowne Plaza hotel in Kensington, where he is being put up. “Pily is still recovering in hospital,” he said. He showed me a picture of her severely burned and bruised back. “I still don’t know what happened to her in that stairwell.” He showed me his screensaver: a picture of his dog, Lewis. “I heard the fire officers never got beyond the 20th floor, that we were almost the last ones out the tower,” he said. “I feel blessed. The neighbour who knocked on our door to wake us got out, but three other neighbours on our floor never made it. I cannot bear to think how they died.”

He copes by keeping busy in meetings fighting for justice for survivors. He was among the group invited to see Theresa May in Downing Street and declined  No 10’s “bizarre offer” to go in through the back door to avoid the press. “I told them, ‘This is not a secret thing where we have to creep around.’”

The Prime Minister was receptive to their demands, he said, but he is angry at Kensington and Chelsea council for its “business as usual” response. He is one of 12 leaseholders who owned their flat but it is still the council’s responsibility — as freeholders — to rehouse them until insurance payments can be determined. “People think just poor people lived in the tower but it’s nonsense. I worked all my life since age 14 and everyone I knew had jobs and there were lots of professionals like engineers and accountants living in the tower. The council has been incompetent beyond belief. I’ve had four phone calls from them in six weeks. The first was to offer me a flat viewing, the second was to call hours later to say, ‘Sorry it’s gone’.

“The third was to offer me a dump that needed three weeks’ work before I could move in, and the fourth was to offer me the first property again because the original people had rejected it. I said, ‘You people are a joke. I need a flat in W11, two bedrooms, call me when it’s available.’ I’ve heard nothing since.”

What about new council leader Elizabeth Campbell? “She is the wrong person to lead the council because she used to be on the TMO [Tenant Management Organisation] board when I was on the Grenfell Leaseholders Association and we were challenging them over fire safety, and she took zero notice of us or of the residents association.”

But Nicholas finds reasons to be grateful. “The community has been amazing. We have been bowled over by how Londoners opened their hearts to us… but there are people who have lost a lot more than possessions. We need to be there for them.”

His greatest wish is to find the two firemen who saved their lives. “I have twice been down to Ladbroke Grove fire station because their Red Watch were the first on the scene, but over 250 firefighters attended from across London and nobody was able to say who saved us.” He took a moment to compose himself as his voice cracked up. “I just want to thank those brave fire officers who ran up 38 flights of stairs and risked their lives to get us. There can be no higher calling than that.”