The new leader of Kensington and Chelsea council says she will not quit despite repeated calls for her to stand down over the Grenfell Tower fire.

Elizabeth Campbell was elected as the authority’s new chief at a fractious full council meeting last night — the first since the blaze in June — where she faced boos and heckling.

Shouts of “shame on you” and “resign” were heard throughout the four-hour meeting as Ms Campbell addressed fellow councillors.

Afterwards, she said: “I think it’s quite understandable, as I said, it comes down to a lack of trust, but I feel I’m stepping up to the challenge rather than stepping down and away from it.” Asked if she had any plans to resign she replied: “No, not yet”.

Her deputy Kim Taylor-Smith also ruled out that the pair would quit. He told the BBC today: “Personally I’ve stepped up to this challenge for the simple reason that I realise there’s nothing I can say to right what was done in the past. The most important thing is to be judged by actions.” 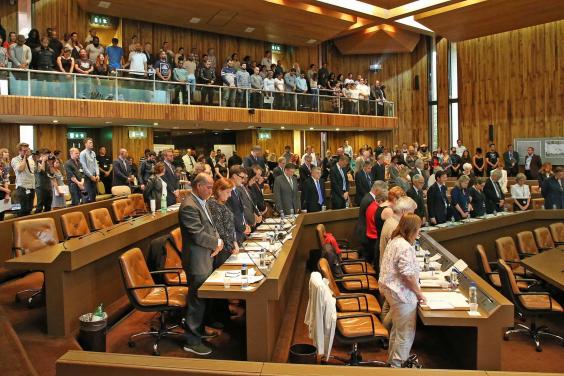 A minute’s silence was held for Grenfell before the council meeting started. (Nigel Howard)

Asked if the Tory-run council had Grenfell residents’ trust, Mr Taylor-Smith replied: “No we don’t.”

Mrs Campbell has been de facto leader since early July when Nicholas Paget-Brown resigned, and was formally elected last night.

Emma Dent Coad, Kensington’s new Labour MP, told the meeting she agreed with the demands of a petition, signed by more than 1,500 people, calling for the resignation of the entire elected leadership of the council.

Councillors heard from traumatised survivors of the disaster who said leaving the tower’s burnt-out shell on view for at least another four months was “torture beyond belief”. 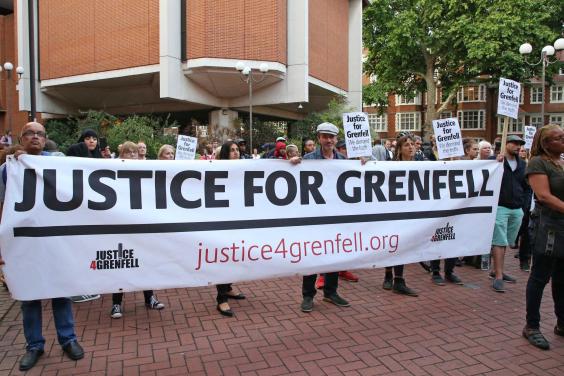 Crowds gathered before the meeting started on Wednesday evening before dispersing by the time it finished. (Nigel Howard)

Experts have warned the Grenfell Response Team that the charred structure is not strong enough to be covered in tarpaulin with police and fire investigations due to continue until November. Residents said the charred hulk that looms over the area was traumatising children. One, speaking through a translator, said: “When we look at the building we see the souls of the people who died there.”

At least 81 people are feared to have died in the fire at the 24-storey block five weeks ago, with 39 formally identified so far.

The meeting ended prematurely when a resident who had just finished speaking fell to the ground.

She was helped to her feet by medics and was assisted as she walked from the room, after lying prone on the floor for several minutes. A female companion said that she had collapsed multiple times since the fire.

At points, muffled crying and shouting could be heard from outside the chamber.