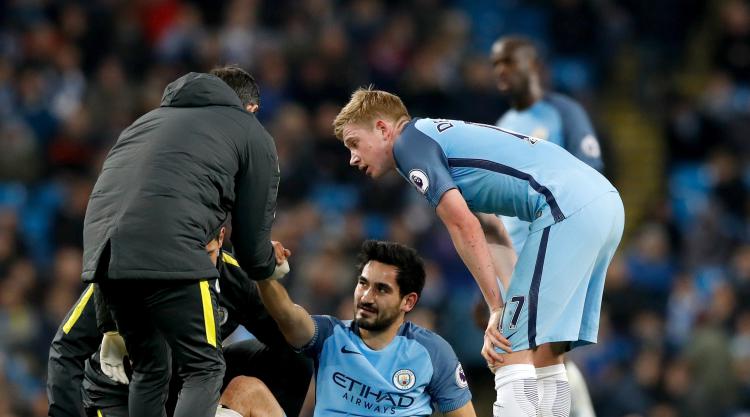 Ilkay Gundogan made his first appearance in eight months as Manchester City lost a friendly 1-0 against Girona in Spain.

The German midfielder has been recovering from the serious knee injury sustained against Watford in December, but following his run-out on the Costa Brava, replacing Phil Foden after 71 minutes, Gundogan could now be available for the Premier League match against Everton on Monday evening.

City opened their domestic campaign with a 2-0 win over newly promoted Brighton at the AMEX Stadium on Saturday.

Manager Pep Guardiola used the trip to the Spanish training camp to further assess his squad although defender Kyle Walker, who joined City in a Â£45million deal from Tottenham, did not travel.

Guardiola made some nine changes to his starting XI from the Brighton game, but there was no action at the Estadi Montilivi for Benjamin Mendy, the Â£52m signing from Monaco, who has just resumed training after injury, while Yaya Toure captained the team.

After Raheem Sterling saw a 20-yard effort saved Portu scored from close range after the ball had been swept in following a break down the left on 14 minutes to give the lead to the Spanish side, who are getting ready to play in LaLiga for the first time when they face Atletico Madrid on Saturday.

Blues goalkeeper Claudio Bravo produced a good stop from Cristhian Stuani before half-time, with midfielder Bernardo Silva, another big-money summer recruit from Ligue 1 champions Monaco, later seeing his second-half effort disallowed for offside as City could not find an equaliser.

City are set to return to England on Thursday evening.