If you want to know what courage in the face of trauma looks like, speak to a Grenfell Tower survivor. Rukayet Mamudu, 69, walked out of the fire in her dressing gown carrying her sleeping adopted son, Tyrshondre, 12, in her arms. As she hurried down the smoky stairwell, unable to see properly, she lost her footing and fell, dropping her son, who woke to find himself engulfed in smoke.

Rukayet and Tyrshondre were lucky in that they lived at No 2 Grenfell Tower on the first floor and were among the first to get out. You may think that compared with survivors who fled the blazing upper floors more than two hours later, she would be relatively unscathed. But, like so many survivors, Rukayet escaped the fire but not the trauma.

“By the time we got out, it was 1.10am,” she said. “By 1.30am, the fire was still contained on one side of the building between the fifth and sixth floors. But as we watched, it leapt from one flat to another, going higher and higher.

“For five hours, until 7am, we sat helplessly and watched Grenfell Tower burn. I saw people shouting for help, raising flags, tying their bedsheets and throwing them out of the window — but the fire would catch the bedsheet.”

Suddenly Rukayet’s jaw clenched, she clawed at the air, slammed the table with her fist and let out a guttural roar. “How many times must I go through this?” she bellowed. “You can see people running around helter-skelter screaming for help. 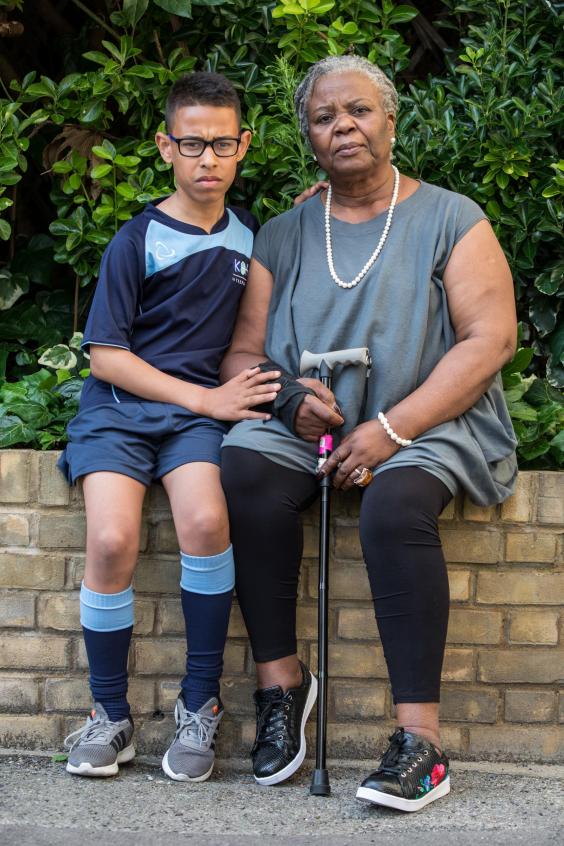 Ms Mamadu broke down as she retold the trauma. (Alex Lentati)

“My friend Zainab [Deen] was up there with her two-year-old son Jeremiah dying in the fire. Please, I don’t want to visit this again. I’m just being brave for my children. This is too much for me.”

She slumped on the table and sobbed. We were in the near-empty dining room of a Kensington hotel where the council have temporarily housed them in a tiny bedroom. As her daughters Amina, 36, and Jemilah, 47, tried to comfort her, I sat there feeling awful for causing her distress and certain that our interview was over.

“Can we stop now?” Amina asked. “Of course,” I said. But Rukayet, who used to run a Montessori nursery school and later a beauty business in Westbourne Park Road, sat up, breathing heavily, and continued apace: “The world will never know what happened in that tower. It was worse than 7/7, worse than 9/11. They will never know what those people went through.

“I am trying to be brave, but each time I talk about it, it brings back everything. My son wakes me in the night and pleads with me to take him home. I say, ‘Our home is burnt’. ‘No,’ he tells me, ‘I want to go home.’

“Four days ago, I went to Chelsea and Westminster Hospital because I couldn’t sleep and was having panic attacks. I had palpitations and sweating. I felt confused. The doctor said it was post-traumatic anxiety. I am still coughing from the smoke inhalation. My chest is still congested. The doctor says it will go with time.

“I walked out of that tower with my son and my mobile phone and dressed only in my dressing gown. These are the only things that came out of the building with me after 70 years. The world does not understand what we went through — what we are still going through.”

Jemilah hugged her mum. “It’s good for you to talk,” she said. “It’s been all bottled up.”

Rukayet asked for water and indicated I should carry on. Is Kensington and Chelsea council giving them the help they need? “The council are on holiday,” she said, looking disgusted. “Every time I speak to somebody at the council about my housing, the next time I call back it’s a new person because the person dealing with my case has gone on holiday. It’s happened four or five times. Don’t they know that people are suffering?”

The council has found her a two-bedroom flat in  Paddington and Rukayet said that she has viewed it and is keen to move in. “I just need somebody at the council to confirm that it’s permanent and to give me a start date, but every time I call, there is another person dealing with my case and I am left hanging.”

The situation was compounded,  she said, because Tyrshondre is high-spectrum autistic and is especially agitated by disruption to his routine. “He is almost a teenager and for him  to be cooped up in a tiny room with  me in a temporary place for five weeks is very challenging. I feel like screaming. The other day I was at the council trying to talk to their minister for housing and a woman said to me, ‘Oh, you are shouting’. I said, ‘I am shouting because I am angry.’ They don’t seem to feel any urgency. How can they be so inhuman?”

What other help does she need? “On the wall of my flat there was a portrait of my oldest son, Jemilu, an engineer in his thirties who passed away 20 years ago. The police told me that because my flat was on the first floor, it is one of the few that was not totally burned, but I have been told I can never go back. I would so appreciate it if they could just retrieve that picture of my son for me. It would mean so much.”

She could also do with medical help, she said. “My lower back discs are worn out and when I fell in the tower it made my back worse, so I really need a wheelchair because my walking sticks are no good.” She has received £2,000 from the Evening Standard Dispossessed Fund, which she used to buy clothing. She is eligible for the fund’s £10,000 fresh start grant announced yesterday, but it is the community’s response that has really moved her. “When I came out of the tower, they brought us tea, cardigans and blankets and one group has since bought me an orthopaedic mattress because for eight days I slept on the floor of the hotel room because the bed was too soft,” she said.

Rukayet gave a deep sigh. “The truth is we need counselling. And not just us, the firemen too. They were heroes, running into the building into danger as we were running out. I will never forget what they did. But you know they couldn’t save everyone. They must be tortured. I think about it a lot. What they — what we — have been through, it’s just totally, totally, totally overwhelming.  I am 70 this year. And it’s like I am starting my life all over again.”