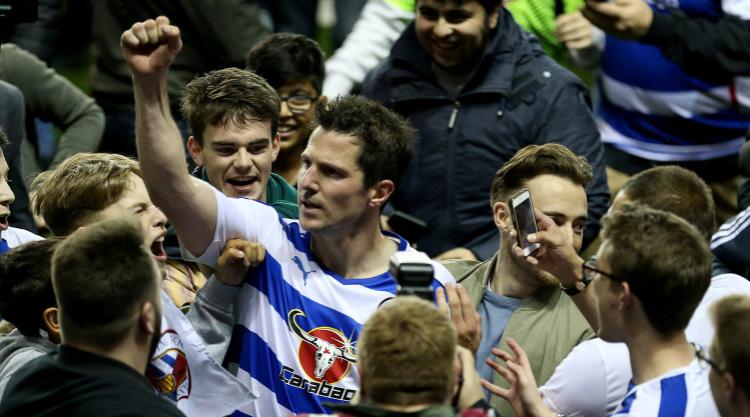 Jaap Stam revealed Yann Kermorgant was the only Reading player in the frame for the penalty which sent them to Wembley.

Kermorgant secured a 1-0 play-off semi-final victory over Fulham with a nerveless spot-kick to seal a showdown with Huddersfield or Sheffield Wednesday on May 29 for a place in the Premier League.

Reading have missed six of their 12 penalties this season, while Leicester fans will still shudder at the thought of Kermorgant’s Panenka-style spot-kick miss in their play-off defeat against Cardiff in 2010.

But there were no frills this time the 35-year-old Frenchman crashed home his 19th goal of the season to secure a 2-1 aggregate victory.

And afterwards Royals boss Stam said: “We trained on penalties yesterday and Yann was the only one who scored! So he had to do it today.

“That’s why I was hoping it would be over in 90 minutes. But nine out of 10 times Yann is going to score with a penalty. We were very confident he would score.”

Kermorgant plans to retire at the end of next season and is now one match away from ending his career in the Premier League.

His big moment came in the 49th minute after Fulham defender Tomas Kalas inexplicably handled the ball as he attempted to run it out of the penalty area.

But Fulham also needed a big performance from goalkeeper Ali Al Habsi, who made a stunning double save in the first half from Tom Cairney’s free-kick and Sone Aluko’s follow-up.

Then, with Reading clinging on for the final 20 minutes, Al Habsi pulled off an even better stop to tip Kevin McDonald’s drive over the crossbar.

“We know Ali’s a great goalie, not only today but all season, that’s why he’s in goal. Again it was a terrific performance,” added former Manchester United defender Stam.

“It’s great to be back at Wembley, I’ve been in my playing career so as a manager, with a lot at stake, it’s going to be nice.

“As a player it was great to get there and as a manager it will be fantastic.”

Fulham manager Slavisa Jokanovic had little doubt who deserved to go through, however.

“We played better football, it’s true. We are the best team but we are not going to play the final.

“We didn’t put the ball in the net and we paid an expensive price.

“We created many chances but we were not clinical enough. But I am proud of my team and how they played tonight and all season.”