A truck driver is due in court today after nine men died in the back of his vehicle in a sweltering Texas supermarket car park.

Some 28 others, including school-age children, were taken to hospital with severe injuries, many suffering from extreme dehydration and heatstroke.

Officials said 17 of those found inside the truck at a Walmart car park in San Antonio were in a life-threatening condition. They are believed to be undocumented immigrants being smuggled by human traffickers.

The Mexican government called for an “exhaustive investigation” and officials from the country said their citizens were among the dead and survivors, while Guatemala confirmed two of its nationals were in hospital. 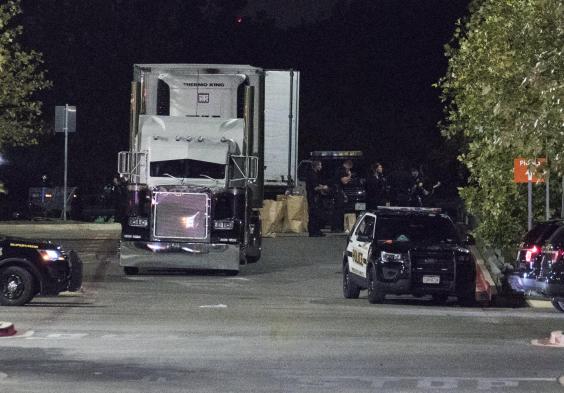 Police were called by a Walmart employee on Saturday night after a person from the truck approached the supermarket asking for water.

The employee first found some water before making the 911 call.

Officials said dozens of people were crammed inside when rescuers arrived, and the rest were believed to have escaped or hitched rides. 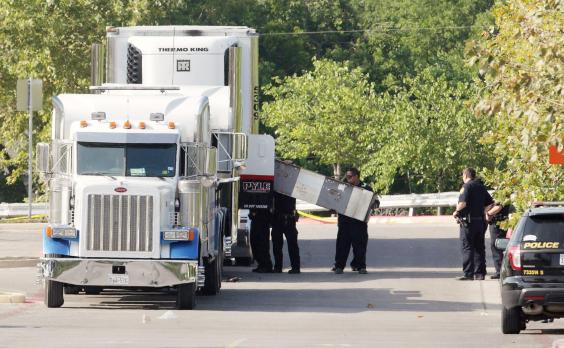 Crime scene: Police officers work on a crime scene after eight people believed to be illegal immigrants being smuggled into the United States were found dead (REUTERS)

Some of those in the truck ran into nearby woods.

Liz Johnson, spokeswoman for the US Immigration and Customs Enforcement agency, said the victims “were very hot to the touch”.

She said: “These people were in this trailer without any signs of any type of water.” There was also no air conditioning inside as outside temperatures reached 38C.

Immigration officials said more that 100 people may have been packed into the truck at some point.

San Antonio is about 150 miles from the Mexican border and authorities said the truck was used to transport undocumented immigrants from Latin America who had crossed into the US on foot. Homeland Security Secretary John Kelly said the incident demonstrated the brutality of smuggling organisations that “have no regard for human life and seek only profits”.