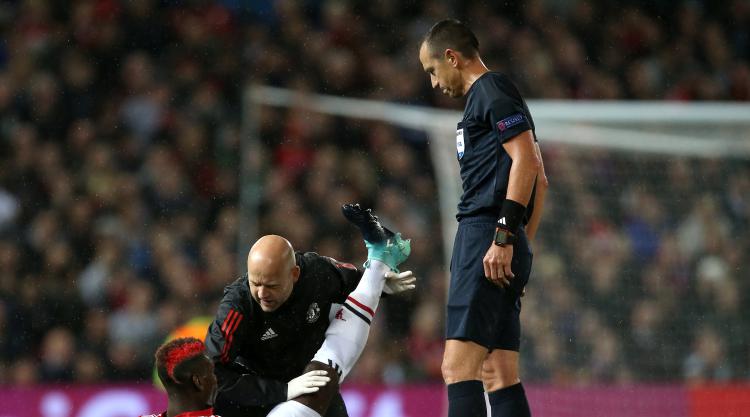 Jose Mourinho fears Paul Pogba will miss a “few weeks” with the hamstring injury that took the gloss off Manchester United’s straightforward return to the Champions League.

Tuesday’s Old Trafford encounter with Basle ended their 644-day absence from European football’s top table and it was as comfortable a reintroduction as they could have hoped for.

Marcus Rashford came off the bench to net his first goal in the competition and wrap up a 3-0 win against Basle on a night when Pogba’s hamstring complaint took the gloss off the Group A victory.

An evening that started with him leading United out as captain for the first time was brought to an halt inside 19 minutes, with the 24-year-old reportedly seen leaving Old Trafford on crutches.

“I don’t know (what the severity is),” Mourinho told MUTV. “I just know from experience it’s a muscular injury.

“In my experience, muscular injury stops you from playing for a few weeks, I think.

“It looks for me too (like a hamstring injury) but I haven’t spoken yet to the medical department.

“So if no Paul for Sunday, we have (Ander) Herrera, we have (Michael) Carrick, we have Fellaini and we have (Nemanja) Matic.”

Mourinho expects United to be more switched on against Everton this weekend, having been irked by the “PlayStation football” United started with as they took their foot off the gas at 2-0.

Rashford added fresh impetus off the bench and wrapped up a comprehensive win – one of several large scorelines on Tuesday evening.

Paris St Germain, Bayern Munich, Chelsea and Barcelona all scored big on the first night of the Champions League group stage, but Mourinho believes United are in the “second level” of this year’s teams.

“Now is just the warming up and in February when us English teams are trying to survive after the winter period, they are fresh and ready after this warm-up.

Basle have enjoyed playing against the big boys in years gone by, drawing their previous two visits to Old Trafford.

Tuesday was an entirely different matter for Raphael Wicky’s side who lost a fourth straight game in all competitions.

“Losing 3-0 to Manchester United is not something you can be happy with, but I’m not disappointed with my team, I’m disappointed by the result,” the Basle head coach said.

“We can learn from this, and this is what I told my team at the final whistle. This team was suffering together, fighting together. What I didn’t like at the beginning was I saw a team that was quite scared.”