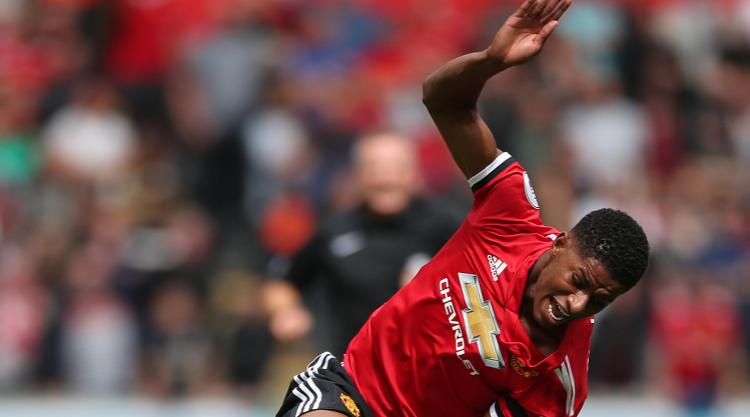 It is the first time for 110 years that United have scored four goals in their opening two league games.

But 19-year-old Rashford largely had a difficult afternoon at the Liberty Stadium despite showing flashes of skill.

The England striker was targeted by Swansea supporters from the first minute as they cl early recalled his theatrical penalty-box tumble in their 1-1 draw at Old Trafford in May.

Rashford was also frustrated as Jonathan Moss ignored several calls for free-kicks to be awarded when he went to ground, the teenager’s dissent earning a strong rebuke from the referee.

“I think he has to learn how to enjoy it (the attention),” Mourinho said after United had wrapped up victory with three goals in the final 10 minutes.

“If he was a bad player, nobody would try to provoke him.

“They see the speed, the danger, and probably they think they can affect him.

“I think if he was on the bench and if he comes on for the last 15 or 20 minutes when the space is there, I think he would do the same things as the other guys did.

“I think he has to adapt to it.

“He is an English kid, a young kid who plays for their national team. Oh, I’m sorry, they are Welsh!”

While Rashford is starting in Mourinho’s team at the moment, it is Martial who is getting goals from the bench.

Martial replaced Rashford in the final quarter and, just like against West Ham in the season-opener, put the gloss on a commanding performance with a tidy finish.

“We are using him (Martial) well and he has the right attitude,” Mourinho said of the France forward who has been linked with a move away from Old Trafford.

“We had a conversation about the future he has here and I think he has a good connection on the pitch with Paul and Romelu.

“I think he is growing in confidence and to have two periods of 20 minutes and score two goals is good for that.”

Mourinho said before the Swansea game that he has faith in Martial and expected him to be better than he was last season.

“Of course he wants to play, start for us, be selected for the national team and go to the World Cup,” Mourinho said.

” That’s good and for me it’s simple.

“I cannot play Premier League, Champions League and cups with 11 players. I need a squad.

“He is working really well and maybe the little French language group we have with Paul, Romelu and Marouane (Fellaini) is helping him.

“He is very well integrated now. They bring him up and his level has improved.”