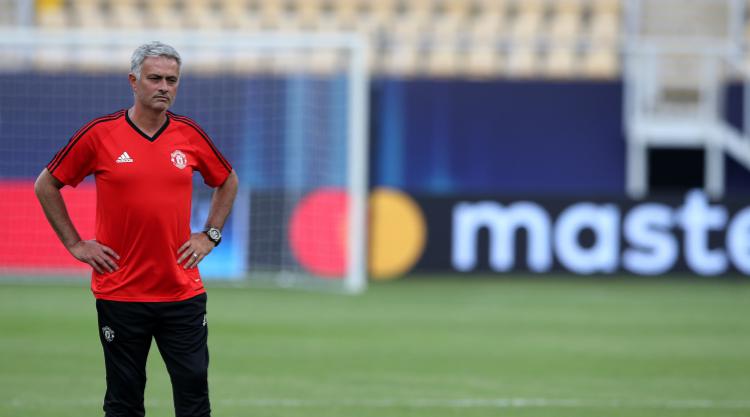 Two of Europe’s most decorated clubs go toe-to-toe in Macedonia on Tuesday evening in the annual battle of the Champions League and Europa League winners.

It offers the chance to kick off the campaign with silverware as United look to win the competition for just the second time, while Madrid attempt to become the first side since 1990 to retain the trophy.

An English club has not won the Super Cup since 2005 but Mourinho believes United can topple the Champions League winners in the Balkans.

“We are going to try,” he said. “That’s obvious, but also obvious is the difference between the Champions League winner and Europa League winner. I keep saying that.

“But, you know, it’s possible. We believe that it is possible.”

United head into the match without a string of players in defence. Despite Luke Shaw and Ashley Young training with their team-mates on the eve of the game, the pair are still recovering from long-term injuries – as is Marcos Rojo, despite also being in attendance in Skopje.

Eric Bailly’s extended ban means the defender will miss the Super Cup, so too will Phil Jones after being suspended for his behaviour towards a doping control officer after May’s Europa League triumph.

“If some player wants to enjoy with his team-mates, I just expect that doping committee sends somebody with him and doesn’t close him in a room and doesn’t forbid the guy to enjoy a special moment.

“No Phil Jones, no Eric Bailly. No Timo Fosu-Mensah because in this moment he is probably going on loan to another club, so we made the decision of not to travel.

“The injuries are the long-term injuries that you all know: Luke Shaw, Ashley Young, Marcos Rojo.

“And apart from that, everybody is available. Obviously (Nemanja) Matic is available but not available like the others.”

Press Association Sport understands Timothy Fosu-Mensah is closing in on a season-long move to Crystal Palace, meaning he misses the trip to scorching Skopje.

Southern Europe is in the midst of a heat wave dubbed ‘Lucifer’, meaning temperatures have regularly soared above 40 degrees Celsius in the Macedonian capital.

On the eve of the game it was 33C as United trained – and a similar temperature come match time would mean cooling breaks are implemented approximately 30 minutes into each half.

“But I think, even for them, it has to be a little bit hard. I know that in Madrid they had training sessions with hot weather, so they are more adapted than we are.

“But, you know, we have to play and we have to enjoy a special moment.

“It’s not many times that a player has the chance to play the Super Cup unless you are like Madrid or Barcelona winning European trophies quite regular.

“So it is a special moment, we have to enjoy with good weather, with fresh weather.

“Maybe (referee Gianluca) Rocchi allows them to have a little break to have some water. I don’t know if it possible or no, but we have to try to play against European champions.”

As for facing Madrid, Mourinho says he has “absolutely no problem with anyone” despite there being some fractious relationship upon departing the Bernabeu helm in 2013.

“I left and it was difficult for the others to say many good things about me,” he said. “I’ve never spoken too much or cried or asked for anything I didn’t think I deserved.

“I left feeling quite at ease, feeling that I had nothing left to give. I gave everything, like I’ve never given before.