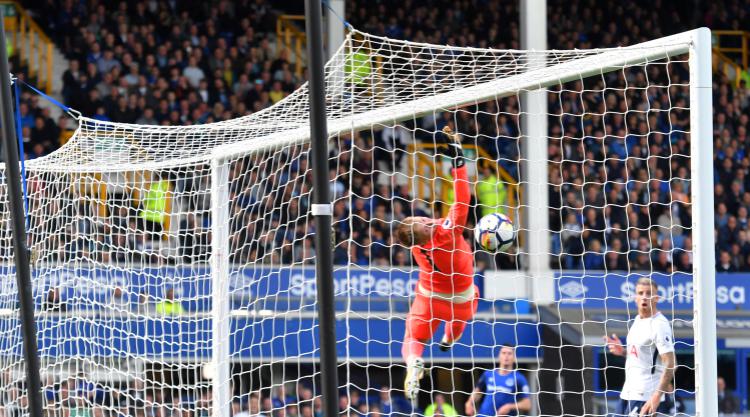 Harry Kane opened his Premier League account for the season and brought up a century of Tottenham goals, netting twice as Spurs turned over a sloppy Everton 3-0 at Goodison Park.

Wayne Rooney‘s appearance in the home team caught the eye, just days after being charged for drink-driving, but he ended up a bit-part in a celebratory afternoon for his successor as England’s leading light.

Kane, who scored a pair against Malta on September 1 after his customary barren August, struck his 100th for Tottenham when an unintentional cross-shot swerved into the top corner then clipped home from close range early in the second half, with Christian Eriksen on target in between.

It was a controlled and clinical display from the London side, for whom Ben Davies excelled at left-back, and they have now taken six of their seven points away from their temporary Wembley home.

Spurs switched to a three-man defence, accommodating Davinson Sanchez’s full debut at the back, while making fellow newcomer Serge Aurier wait in line behind Kieran Trippier.

Everton’s starting XI contained just two survivors from the counterpart fixture last season, Ronald Koeman’s first as manager, with Leighton Baines and Idrissa Gana Gueye the constants in a time of considerable change for the Toffees.

Rooney was subjected to a couple of mocking chants from the away end, though it was frankly a tamer songbook than he might have feared, and the former England captain was more irate at being denied two early free-kicks by referee Graham Scott.

It was Rooney’s neat, spinning pass that created the first chance of the day – freeing Cuco Martina, whose low cross was turned just wide of the near post by Sandro Ramirez.

Spurs felt their way into the game, Eriksen missing by a yard after Dele Alli brought down a cross on his chest and Moussa Sissoko’s shot blocked by Ashley Williams after good work down the left.

One thing they had failed to do so far was get their main striker into the game. Undeterred, Kane drifted into a deep position on the right touchline in the 28th minute and hoisted a big, hanging cross into the area.

Jordan Pickford was not far off his line but as the trajectory became apparent – surprising Kane as much as anyone – the Â£30million keeper was helpless to prevent it sailing over his head and into the net.

Everton had one chance to level before succumbing to a second but Toby Alderweireld did his bit for the cause – taking Sandro’s effort flush in the face.

Spurs drew blood just before half-time, Alli creating the chance by picking Williams’ pocket. The impressive Ben Davies stung Pickford’s palms after meeting the resulting cross and when the ball broke, Eriksen was on hand to convert.

After boos at half-time Koeman replaced Sandro and Davy Klaassen with Dominic Calvert-Lewin and Tom Davies, but the pair barely had a chance to take the temperature before Kane instigated a quick give-and-go with Ben Davies.

He raced on towards the six-yard box and tapped home as the full-back’s cross landed neatly into his stride. A hat-trick briefly looked on, Alli scrapping in the box and Kane testing Pickford from a tough angle, but neither side added to the score.

Hugo Lloris’ slack pass from the back almost allowed Everton to do so, but Gueye lacked the predatory instincts to make him pay.

With Kane granted an early breather it was left to Alli to push for a fourth, but his delicate curler crept over the crossbar just before full-time.