The Duke and Duchess of Cambridge were given a rapturous welcome in Warsaw when they went on a walkabout outside the presidential palace.

Crowds screamed with delight as the couple appeared before pressing flowers on Kate and leaning forward to take selfies.

Another read “We (heart) Kate and William”. 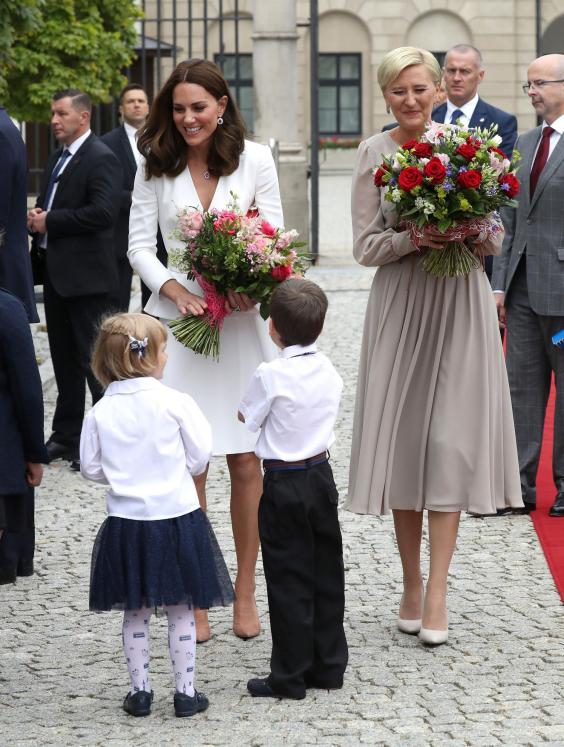 Kate is handed flowers outside the Presidential Palace in Warsaw, Poland (PA)

The couple were given their first glimpse of Poland’s enthusiasm for the royal family on Monday when a group of children waved flags as they left the palace and the Duchess was presented with a bouquet of flowers.

However it was outside the palace that they saw the full extent of Warsaw’s royal fervour when they were greeted by a crowd well over a thousand strong.

“The Duchess of Cambridge is very nice, she is beautiful,” said Patrycja Chelminska, 17, after talking to her. “It was my dream to meet her. I am so happy.”

Magda Mordaka, 21, a student, said: “We are fans of the British monarchy. We have a Facebook group. We love her style, and her contact with people. We were waiting for this visit from the very beginning. What would she wear? Would she bring the children?

“We were telling her that she is beautiful and perfect, but she said it’s not true – it’s just the make-up.” 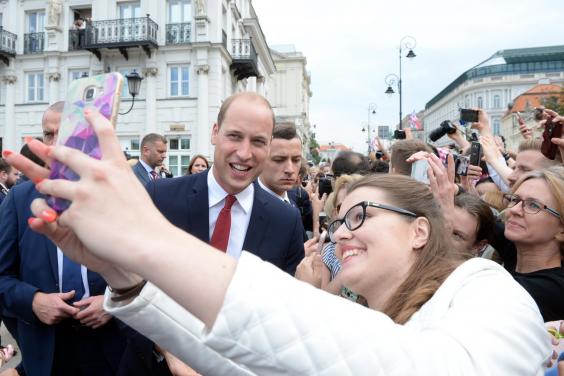 Prince William, Duke of Cambridge, poses for a selfie (EPA)

Sebastian Brodowski, 39, an accountant who lived in the UK for 15 years, said: “She is a stunning lady – she has got class. I really love her attitude. I believe that she will be the next Diana.”

Others, inevitably, were left disappointed. One young man brought a copy of a biography of the Duchess and tried thrusting it towards Kate, but without success. “She cannot sign it!” he said, sadly.

The walkabout followed lunch at the palace with the president Andrzej Duda and his wife Agata.

George takes some gentle coaxing before getting off plane in Poland

The couple showed William and Kate the gardens from a terrace at the back of the palace before taking them into an intimate lunch – just eight guests – in the White Room.

They arrived in Poland with their children Princess George and Princess Charlotte for the start of their five-day European tour of Poland and Germany.

The royal children flew in a private chartered plane with William and Kate, and the couple’s entourage, before touching down at Warsaw Chopin Airport.

Prince George looked a little uncertain as he took his first steps in Warsaw. He was led down the plane’s steps by his father as Kate, who wore a white Alexander McQueen outfit, followed carrying Princess Charlotte.