The Duchess of Cambridge joked she and Prince William should have another baby, after being given a present designed for newborns.

Kate, 35,already a mother-of-two, was offered a cuddly toy designed to soothe tiny babies during an event for start-up tech companies.

Saying thank you for the present, she turned to the Duke laughing and said: “We will just have to have more babies.”

The soft toys, from company Whisbear, are designed to comfort newborns by replicating the sound of the womb, responding to their cries to soothe them. 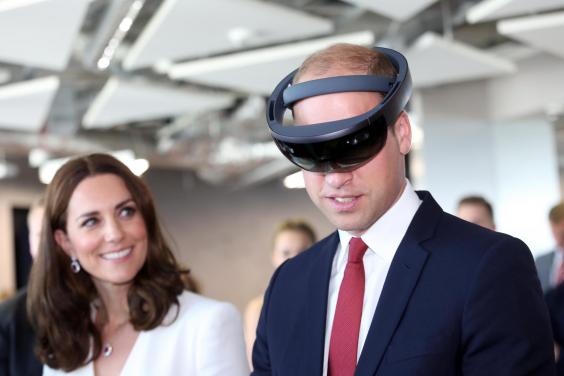 Julia Sielicka-Jastrzebska, who founded the company with her sister, said the Duchess made the light-hearted comment after learning the bears, which she had admired, were designed for children younger than George and Charlotte.

“We gave the Duchess some presents for Prince George and Princess Charlotte,” she said. “She said they should have more babies, and they laughed.”

Among the presents were a bear for each child, and a t-shirt for the Duchess with the slogan “I’m perfect”; part of the company’s campaign to encourage mothers not to feel the pressure to be flawless.

The Duke and Duchess were at The Heart, an incubator for digital and tech start-ups in Warsaw.

The Royal couple were shown a variety of innovations, including a robot designed for children to code and a fetal heart monitor to allow pregnant women to track their health at home.

The Duke and Duchess both tried on virtual reality headsets showing them a view of Warsaw and played with a robot by company Proton which moved when the Duchess patted its head.

George takes some gentle coaxing before getting off plane in Poland

Before taking their leave, the Duke and Duchess spent time with six Polish students who are studying in the UK.

Asked for a selfie with three of them at the end, the Duke laughed “I’m allergic to selfies but let’s take a photograph”.

Watching his wife pose with the others, he made her laugh by teasing her: “You don’t look as clever as the other three.”

Finally, the Royal couple presented whisbear with the HealthTech Startup Award, giving a second award for “omnichannel startup” to Migam, which helps deaf people accessing services by connecting them with sign language interpreters via video.