The Duchess of Cambridge wowed Polish high society as she donned a daring dress by one of the country’s top fashion designers at a garden party to celebrate the Queen’s birthday.

Kate dazzled in the sleeveless white number with a plunging neckline by Gosia Baczynska, who has been dubbed the ‘tsarina of the Polish fashion scene’.

Last week she wore a dusty pink custom-made Marchesa gown with a similar neckline for a state banquet for the King and Queen of Spain.

Miss Baczynska, who is known for her bold designs, was the first Polish designer to feature in the Paris fashion week calendar.

Prince William made a short speech to the 600 guests at the event, which was hosted by Britain’s ambassador to Poland, Jonathan Knott.

He was clapped and cheered by the crowd as he addressed them in faltering Polish to say, “good evening, we hope you have a nice party”.

Standing beside Polish President Andrzej Duda and his wife Agata,  William also hailed the country’s  “courage, fortitude and bravery” in surviving centuries of assaults, and especially its “incredible bravery” during the brutal Nazi occupation.

And he read a message from the Queen which highlighted the close ties between Poland and Britain which stretch back 1000 years. 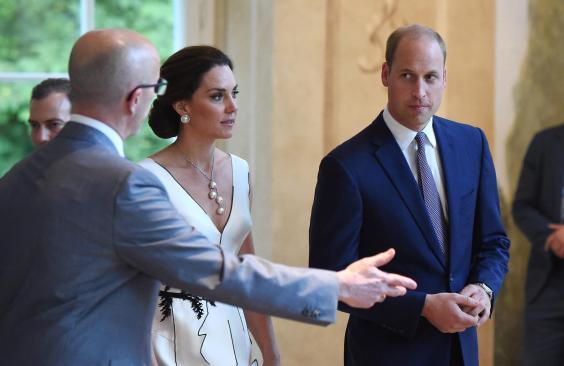 William and Kate were met several leading Polish dignitaries at the party held at the Orangery in Warsaw’s Lazienki Park.

The park was the residence of king Stanislaw, the last king of Poland.

They were also treated to a performance from the String Quartet of the National Polish Radio Sympathy Orchestra, led by UK raised Polish national Rafal Zambrzycki-Payne, a former BBC young musician of the year.

In a speech Prince William spoke of the close ties between the U.K. and Poland.

George and Charlotte arrive in rainy Warsaw with William and Kate

He said: “The links between Britain and Poland go back centuries, and are steeped in a rich history of cultural exchange and close commercial relations.”

Prince William went on: “We in the United Kingdom value our links with Poland enormously.  We admire Poland as a remarkable example of courage, fortitude and resilience.

“You have survived centuries of assaults on your land, including partitions that were designed to wipe you off the map of Europe.

“In the 20th century, Poland displayed incredible bravery in resisting brutal Nazi occupation, not least the heroic uprising in Warsaw’s Jewish ghetto in 1943, and the Warsaw Rising of 1944.

“Catherine and I were very moved to visit the Warsaw Rising Museum this afternoon with President and Mrs Duda; as I know we will be, too, when we visit Stutthof concentration camp tomorrow, a reminder of the suffering of Poland’s people and of the Holocaust.”

He added: “After the Second World War, Poland endured the imposition of Communist dictatorship.

“But in 1989, in the culmination of a great national renaissance spearheaded by Solidarity, Poland threw off the authoritarian shackles and again took its place as one of the leading nations of Europe.”

He concluded by reading a message from the Queen.

It read: “Prince Philip and I send our warmest good wishes to all of you attending this special Garden Party on the occasion of The Duke and Duchess of Cambridge’s first official visit to Poland.

‘We have fond memories of our visit to Poland in 1996, when we experienced its world-renowned hospitality in Warsaw and Krakow. I am delighted that The Duke and Duchess of Cambridge will be able to experience this for themselves in Warsaw and Gdansk.”

‘In 1996, I spoke about the depth of British-Polish relations, dating back nearly a thousand years, and it gives me great pleasure that the friendship between our two nations and peoples has since gone from strength to strength. I have no doubt it will continue to prosper in the years to come.

‘I hope you have a most enjoyable and memorable evening.”