At least two people are dead and over 100 injured after a powerful earthquake struck Greek holiday resort islands early on Friday morning.

The 6.7 magnitude quake hit seven miles north-east of Kos in the Aegean Sea, and was felt in nearby Turkey.

Holidaymakers were forced to sleep outdoors for safety as buildings crumbled due to the strength of the tremor.

Rescuers were checking for trapped people inside houses after the quake struck in the middle of the night.

Kos Mayor Giorgos Kyritsis said the army was mobilised along with emergency services. The island’s port was among structures that sustained damaged and a ferry en route there was not docking, the coast guard said. 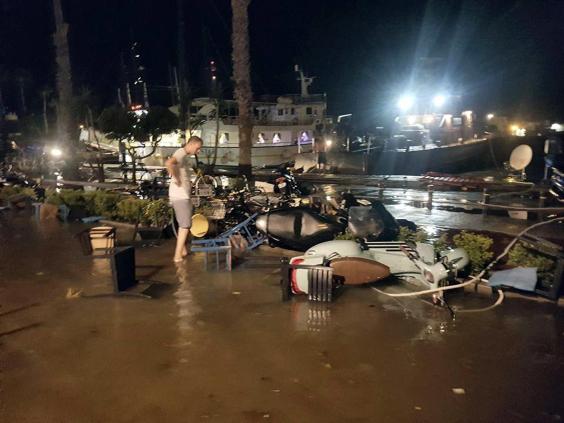 Lauren Duffy, a 20-year-old student from Merseyside, was evacuated along with her mother and sister from the Atlantis Hotel, which was strewn with shattered glass.

She said: “We were asleep in our hotel room when we were woken by really violent shaking, and we all were screaming and told to evacuate from the hotel.”

She said they were able to return to the hotel just long enough to retrieve their passports before they were forced out again by tremors.

Tom Perry-Fox, who was on the second floor of his hotel in Kos when the earthquake struck, said it was “like a movie”. 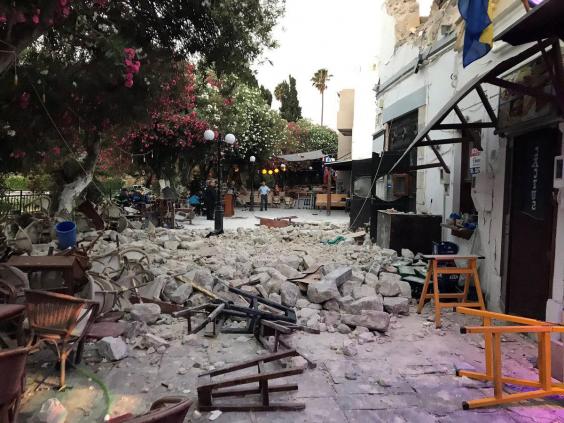 Wreckage: damage caused by the earthquake on the Greek island of Kos (REUTERS)

A mother and daughter who went on holiday to Kos for a break following a sudden death in the family said they woke up to their room shaking.

Eleanor Ruddock and her 22-year-old daughter Naomi immediately grabbed their phones and ran outside.

Speaking from their room in the Akti Palace resort, Ms Ruddock said: “We were asleep and we just felt the room shaking. The room moved. Literally everything was moving. And it kind of felt like you were on a boat and it was swaying really fast from side to side, you felt seasick.”

“Two or three of them are in serious condition and are in surgery,” he said.

He said the injured included people who were underneath a building that collapsed. Ferry services were suspended due to damage at Kos’s main port, where a 14th-century fortress also was damaged. A minaret from an old mosque also was damaged.

Greek officials said the quake was 6.5-magnitude. It was centred six miles south of Bodrum, Turkey, and 10 miles east-northeast of Kos with a depth of six miles, according to the US Geological Survey.

Turkish disaster officials said the earthquake had a magnitude of 6.3, and more than 20 aftershocks have been recorded.

​Esengul Civelek, governor of Mugla province, said there were no casualties according to initial assessments. She said “there were minor injuries due to fear and panic”.

In Bitez, a resort town about four miles west of Bodrum, the quake sent frightened residents running into the streets.

Hotel guests briefly returned to their rooms to pick up their belongings but chose to spend the rest of the night outside, with some using sheets and cushions borrowed from nearby lounge chairs to build makeshift beds.

Greece and Turkey lie in an especially earthquake-prone zone.