Ku Klux Klan supporters shouting “white power” marched through a US town – but were outnumbered by hundreds of anti-racist protesters.

The white supremacists held an authorised march through Charlottesville in Virginia in protest at a plan to remove a statue honouring pro-slavery Confederate figure General Robert E Lee.

Police were deployed to the town as KKK members wearing white sheets and carrying Confederate flags were separated from rival groups by metal barricades.

A Virginia State Police spokeswoman said: “Police were deployed to secure access to the park and ensure the safety of all involved”. 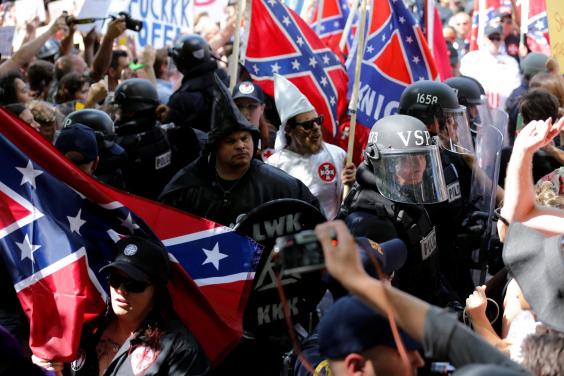 White supremacists during the rally in Virginia (REUTERS)

Authorities said the counter-protests were “unlawful” and used tear gas to disperse crowds. Twenty-three people were arrested, but officials could not confirm their affiliations.

In February, the Charlottesville City Council voted 3-2 to remove the statue from one of its parks and make plans for a new memorial to remember the southern city’s enslaved population. At least one person who participated in the Klan rally against the statute removal could be seen with a holstered pistol.

Confederacy statues and flags have been removed from public spaces across the United States since 2015, after a white supremacist murdered nine black parishioners at a South Carolina church.

Critics of the monuments say they foster racism by celebrating leaders of the Confederacy in the pro-slavery South during the U.S. Civil War. Supporters say they represent an indelible part of U.S. history and part of regional heritage.