Royal ambassadors Prince George and Princess Charlotte were back on parade today as they headed for Germany on the latest leg of the family’s Brexit charm offensive.

The Duke and Duchess of Cambridge and their children walked hand-in-hand at Warsaw military airport in Poland as they boarded a private jet bound for Berlin.

George, who turns four on Saturday, had appeared shy when the family arrived in Poland earlier this week. Today he strode confidently across the runway with his parents.

He even tugged at his father’s hand as the duke said goodbye to waiting dignitaries, appearing eager to board the aircraft. 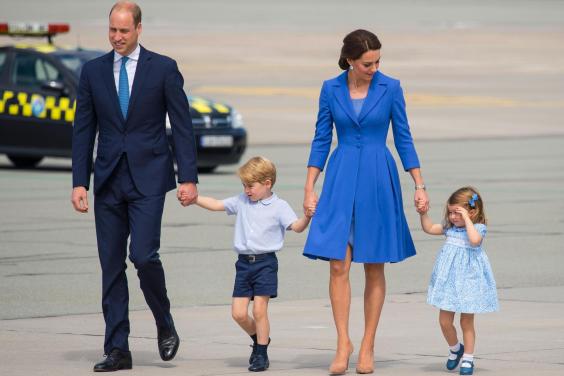 Charlotte, two, also seemed impatient and pulled at Kate’s hand in an attempt to join her brother as he made his way up on to the jet.

George appeared tired as he arrived at Tegel Airport in Berlin with his parents, while Charlotte carried a small posy of flowers.

The children have spent most of the trip away from the public gaze.

In Poland, they stayed at Belweder palace in Warsaw as guests of President Andrzej Duda while their parents carried out official functions.

The trip, taken at the request of the Foreign and Commonwealth Office, is being framed as another Brexit diplomacy tour, helping to maintain and strengthen the UK’s relations with Europe as it leaves the European Union.

The Cambridges were due to arrive in Germany at Berlin military airport today. Chancellor Angela Merkel was then set to hold a private meeting with William and Kate in the capital.

William first met the German leader during a trip to Düsseldorf last year. Afterwards William and Kate were due to visit the Brandenburg Gate, a symbol of German unification, and the city’s Holocaust museum. 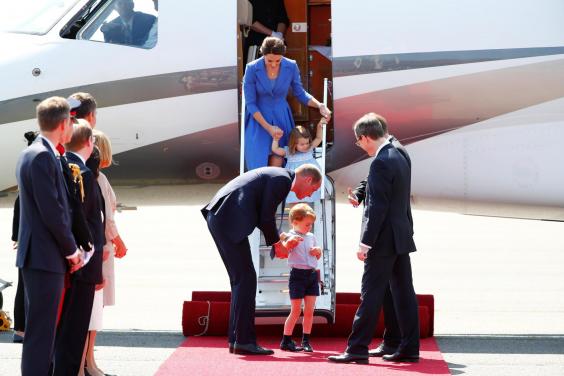 The Royals disembark their plane at Tegel airport in Berlin after travelling from Warsaw, Poland (REUTERS)

Tomorrow the pair will renew their sporting rivalry when they visit the city of Heidelberg, twinned with Cambridge.

The duke and duchess will take to the waters of the River Neckar to cox opposing rowing teams in a race, with crews drawn from both cities.

The final day will see the duke and duchess visit Germany’s second-largest city, Hamburg. The five-day visit is inevitably being viewed in the context of Brexit and the “soft power” influence of the royal family.

While its members will have scant, if any, impact on negotiations between the two sides, Foreign Office mandarins believe such trips at least help jog memories about the close ties that must endure once the UK departs. @theroyaleditor