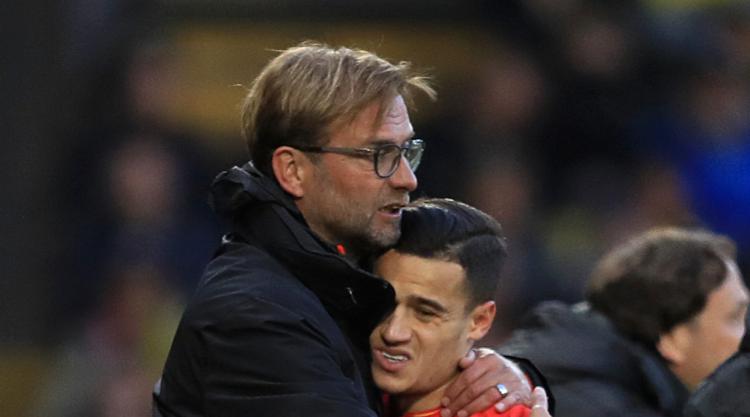 Jurgen Klopp insists the transfer saga surrounding Liverpool’s Philippe Coutinho has not damaged their relationship and the Barcelona target will be welcomed back with open arms once he is over injury and illness.

The Reds have rejected three bids from Barca for their Brazilian playmaker, the last of which was thought to be worth £118million with add-ons, and have maintained the stance that the 25-year-old will not be sold this summer, even after he lodged a transfer request.

With Barcelona reportedly ready to admit defeat after their deadline to agree a deal passed, Coutinho is facing up to the fact he will be remaining at Anfield.

A back injury and a current bout of sickness are keeping him out of action, but Klopp stressed that when he is fit enough to return, there is no need for any clear-the-air talks or lengthy reintegration process.

“Of course, everything is okay between me and him,” Klopp said. ” Absolutely. 100 per cent.”

Coutinho is yet to feature this season due to a back injury picked up in pre-season and will once again be unavailable when the Reds face Hoffenheim in the second leg of their Champions League qualifier at Anfield.

Klopp revealed that Coutinho is also suffering from a sickness bug and is unsure when he will return.

“He can’t start tomorrow because on top of that he’s now ill,” the German added.

“It will take time because he has not trained for a long time. I’ve no idea at this moment (when he will return), we would have to check when he is back.”

Regarding suggestions a deadline imposed by Barcelona to complete a transfer had now elapsed, Klopp replied: “I never give any comment to whatever’s written or said but it’s 100 per cent clear that nothing’s changed.”