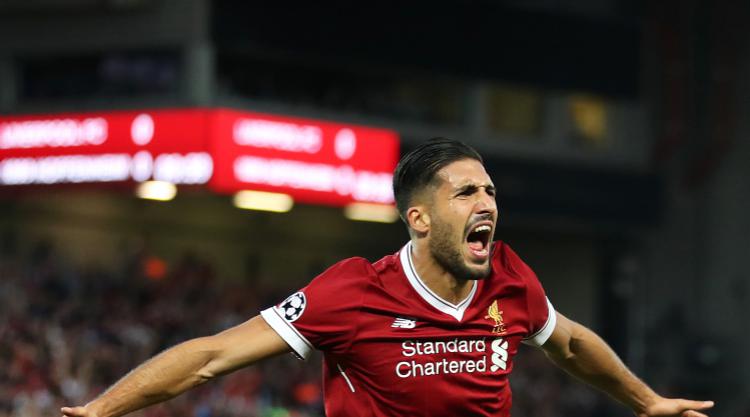 Liverpool overpowered Hoffenheim 4-2 at Anfield to ease into the Champions League group stages with a 6-3 aggregate play-off victory.

Most of the damage was done in a sensational 11-minute spell early in the first half when Germany’s Emre Can struck twice against the Bundesliga side and Mohamed Salah also got on the scoresheet.

Mark Uth, who scored and missed a penalty in the first leg, pulled one back for the visitors but the outstanding Roberto Firmino settled the tie before a Sandro Wagner consolation.

The result ensures England will be represented by five teams when the draw for the group stages is made on Thursday.

Liverpool manager Jurgen Klopp had warned against complacency ahead of the clash but the five-times European champions were never threatened.

They made a blistering start with Alberto Moreno and Salah going close in the opening minutes and Mane having an effort blocked by goalkeeper Oliver Baumann.

It took just 10 minutes for the Reds to find the net as Firmino released Mane and his backheel played Can in on goal. The German’s shot flew home with the aid of a deflection.

The hosts doubled their lead after Firmino pulled the ball back and Salah was left with a simple tap-in after Georginio Wijnaldum’s shot came back off the post.

A third goal quickly followed after Mane again burst clear and wrong-footed the Hoffenheim defence with another backheel, this time finding Firmino. The Brazilian looked up and picked out Can with a cross to the back post and the finish was composed.

Leading 3-0 after 21 minutes, the Reds were rampant but they were checked when first leg goalscorer Uth, an early replacement for Havard Nordtveit, beat Simon Mignolet with a low shot across goal.

A moment of uneasiness from Mignolet aside, Liverpool looked sharp again at the start of the second half.

Wijnaldum went through on goal only to be denied by the shoulder of Baumann, who then pushed away a strong drive from Mane.

The fourth goal came as Reds captain Jordan Henderson robbed his opposite number Kevin Vogt and powered on towards the box just after the hour. Unselfishly, he then played in Firmino and the forward made no mistake.

That ensured Liverpool’s place in the group stages for the first time since 2014-15 was secure, but it was not quite the end of the action.

Mignolet had to stretch to keep out a deflected shot from Kerim Demirbay and Hoffenheim grabbed another consolation when former Leicester forward Andrej Kramaric teed up a header for Wagner.