The Duchess of Cambridge tried her hand at conducting a world renowned orchestra when visiting one of Hamburg’s newest landmarks on the final day of the royal tour of Germany.

Kate, who is visiting with Prince William and their children Prince George and Princess Charlotte, briefly conducted the Hamburg Philharmonic State Orchestra in front of 300 children.

The audience was filled with children from all corners of the city, with the aim of inspiring a new generation to develop a passion for music.

Kate, 35, leant forward and pointed the baton straight at the orchestra after watching children being coached how to do it and get the best out of the musicians.

Compere Juri Tetzslaff asked her if she played any instruments and she told him flute. 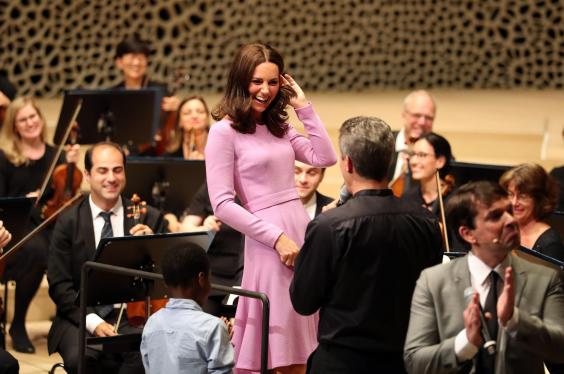 The Duchess tries her hand at conducting the orchestra (PA)

“How long did you play the flute?” He asked.

“Throughout my school years until the age of 18,” she replied. 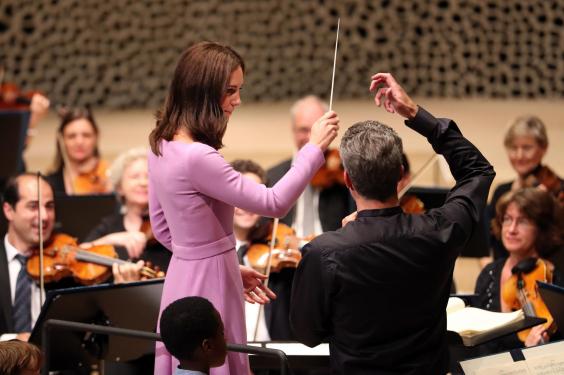 The concert hall tweeted: “Over 300 pupil are enjoying a concert of the @HH_Symphoniker and the 5th of Beethoven AND Kate conducting the orchestra.”

The Duchess of Cambridge conducts the Hamburg Philharmonic Orchestra

The Duke and Duchess later listened to a special performance by the musicians.

The royal couple, who fly home on Friday, rounded off their week long visit with a tour of Hamburg and waved goodbye to adoring fans at an official departure ceremony where Prince George and Princess Charlotte made an appearance.

They began their day by visiting the city’s maritime museum on the banks of the River Elbe. 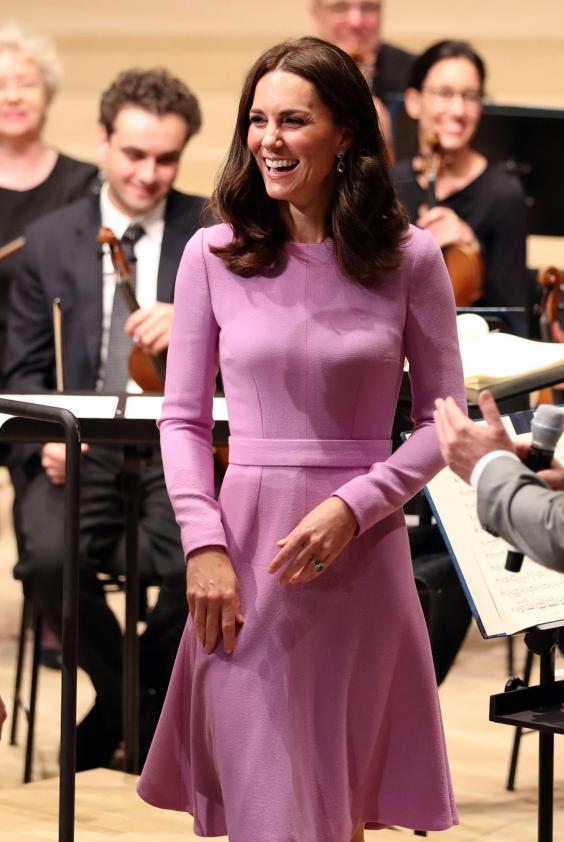 The Duchess of Cambridge in Hamburg(PA)

The Duke of Cambridge had a touching reminder of his family history when he came face to face with a model of the Royal Yacht Britannia, which was decommissioned 20 years ago.

The model was only finished two days ago. 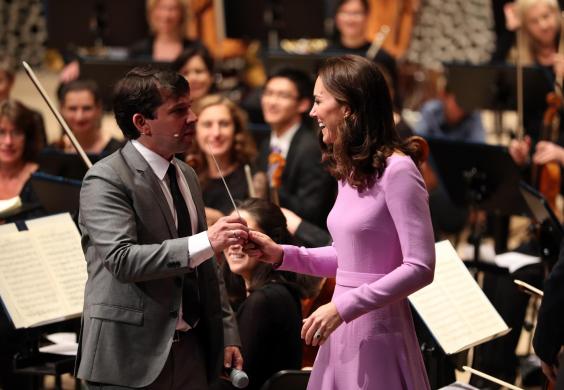 The Duchess tried her hand at conducting (PA)

However in a stunning coincidence, it was commissioned before anyone realised that the Duke and Duchess were going to visit Hamburg.

“Is that Britannia?” said an astonished William. “It’s beautiful – amazing.”

He was shown the model by Christian Hinneborg, 30, grandson of the museum’s founder, who said that the 1:96 scale model took three months to build.

William said he had only been on Britannia a few times. “I don’t know it that well.”

Asked if there were any mistakes, he joked: “I will have a careful look. I will get my magnifying glass out! But I’m not an expert. My father, being a naval man, would know. And my grandmother would definitely spot anything. But it is the most wonderful model.”

Asked by William why it had been built, Mr Hinneborg said he was “passionate” about royal and state yachts.

He said afterwards: “It was finished two days ago. We ordered it without knowing that the duke and duchess were coming to Hamburg. It is a coincidence that it just got finished.”

In an impromptu addition to their museum tour, the Duke and Duchess tried their hand at the cargo ship simulator, which allows visitors to experience what it is like to navigate a ship into Hamburg harbour.

“Let’s see if I can hit that yacht!” joked William as he took the wheel.

He may have had the wheel, but the volunteer in charge of the simulator, Hans Trey, put Kate in charge and got her to sound the fog horn. “He is just the helmsman,” he told her. “You are the captain.”

Afterwards he said: “They did a wonderful job. He wanted to go at full speed, but we would have told him later on to stop the ship. He knew exactly how to steer – I didn’t have to tell him.”

The couple were also shown a 6.9 metre long Lego model of the liner Queen Mary II, and met a group of scientists working on a variety of ocean-related projects, part of the UK-German Year of Science.

Tim Eder, a government official who told the couple about a schools project about plastic waste in the ocean, said: “They expressed their concern about single use plastic bags.”

At the attraction, the royal couple celebrated the joint UK-German year of science, which this year is focused on oceans.

William and Kate’s final engagement was a tour of aircraft manufacturer Airbus’s Hamburg plant, which is home to production, maintenance and training facilities.

During the visit the couple met apprentices, both German and English, and saw the assembly line of an A320 aircraft and view the cockpit of a near-complete plane.