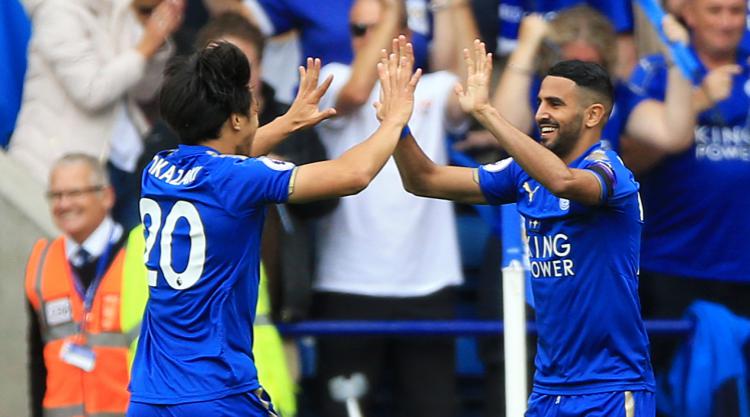 Riyad Mahrez inspired Leicester to breeze past toothless Brighton as the Foxes cruised to a 2-0 win.

Shinji Okazaki cashed in on goalkeeper Mathew Ryan’s error after just 52 seconds to set the tone at the King Power Stadium.

Harry Maguire then netted on his home debut as Craig Shakespeare’s men strolled to their first win of the season on Saturday.

It was as easy as any win comes in the Premier League and carefree Mahrez led the charge as he taunted Brighton, shaking off continued transfer speculation.

Roma have had three bids rejected for the Algeria international – the most recent of Â£32million – but there was no sulking from the winger who put on the sort of display which has made him so sought after.

He was back to the form which earned him the PFA Player of the Year award in 2016 during Leicester’s shock title success.

Brighton had no answer to him, barely making a dent in Leicester’s game plan, and, despite spending around Â£40million this summer, looked ill-equipped to deal with the demands of the Premier League.

With former teams Norwich and Newcastle, and now Brighton, Chris Hughton has seen his sides score just 18 times in 25 games on the road in the Premier League.

It had been a major problem for him in the past and there was nothing to suggest that was going to change, although it was at the back where their issues started.

It was Brighton’s first top-flight away game for 34 years, but they fell behind after just 52 seconds following a gaffe from Ryan.

Mahrez tricked his way into the area and, with Brighton backing off, the Algerian curled in a shot which Ryan should have dealt with.

Instead, the 25-year-old, who joined from Valencia for around Â£5million in the summer, spilled it straight to the waiting Okazaki, who accepted the gift to tap in his second goal of the season.

The goal allowed Leicester to settle and dominate, with Mahrez Brighton’s tormentor-in-chief as the Seagulls struggled to get to grips with him and the Foxes.

Hughton’s side were rattled and made mistakes, surviving after Markus Suttner’s error let Okazaki in, only for Shane Duffy to block Jamie Vardy’s effort and the England striker to miss the rebound.

Brighton offered little in response, with Glenn Murray starved of service and forced to drop deep to collect the ball, giving the visitors no presence up front.

Mahrez and Okazaki continued to pull the strings for Leicester, but it was Matty James, searching for his first Foxes goal since February 2014, who went close when he fired over.

With Brighton’s first-half attack virtually anonymous there was a real sense Leicester would not need a second goal, but Okazaki did almost double their lead when he turned Vardy’s cross wide five minutes before the break.

Yet the Foxes did not have to wait long for a second when Maguire nodded in Mahrez’s corner at the far post nine minutes after half-time, his first goal since a Â£17million switch from Hull.

It was routine stuff from Leicester and another stark reminder to Brighton of the challenge they face to stay in the Premier League.

Substitute Tomer Hemed did at least force a save from Kasper Schmeichel, his first of the match, with 18 minutes left, but Brighton had no late answers and Leicester were content with a job well done.