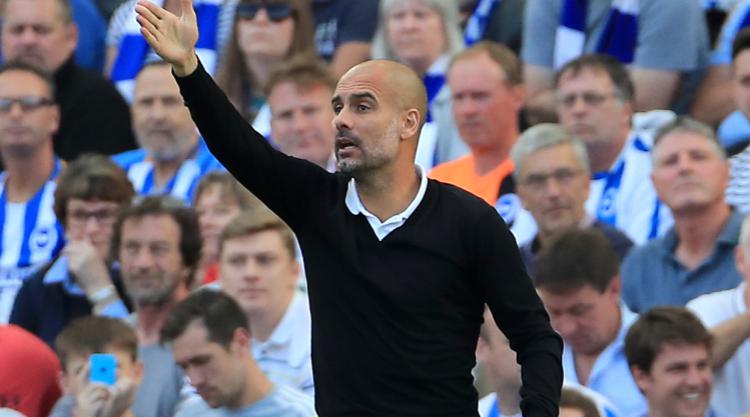 Pep Guardiola played down Manchester City’s favourites’ tag after his side defeated Brighton as their Premier League rivals faltered elsewhere.

Arsenal were unconvincing in beating Leicester on Friday night, Liverpool drew at Watford and holders Chelsea were beaten at home by Burnley.

But City, boosted by a Â£200million summer spending spree, were ruthless in overcoming the stubborn Seagulls, with Sergio Aguero’s goal after 70 minutes followed by Lewis Dunk’s own goal.

Guardiola, accustomed to being a favourite following spells at Barcelona and Bayern Munich, said: “Last season it was too. Last season sitting here after the Sunderland game you said ‘you are the favourites, you are the most beautiful and handsome and nice guys in the league’.

“After you know what happened last season? Chelsea killed us.

“Okay, we accept what the people say, we have to try to improve and improve.

“I’m so satisfied with what we have done, but of course we can get better. About who is the favourites or not, it’s your (the media’s) job, not ours.”

Asked whether being favourites bothered him, Guardiola said: “No. What I cannot control doesn’t matter.

“Last season it was the same and look what happened. But I’m used to that.

“I was manager at Barcelona and Bayern Munich. I can handle that situation.”

Guardiola cautioned his players following the shock results earlier in the weekend ahead of their Saturday tea-time kick off.

He added: “We spoke about that. It’s the Premier League. I lived that last season. Here every game is a battle.

“The first game is always complicated. We saw this weekend what happened in many games.

“From my experience in Barcelona too, especially against the newly promoted it’s always difficult. And we did it.

“We were stable. We controlled the game and the game was in our hands.

“To start with three points away it’s always so important.”

Guardiola had some doubt in his selection, leaving Raheem Sterling out of the starting line-up despite a strong pre-season showing.

That will be a weekly issue, given the talent in his squad.

City had to show patience at the Amex Stadium, taking time to get into their groove.

But when they did it was a hint of what was possible as Aguero converted after a slick move with Kevin de Bruyne and David Silva.

And soon afterwards Dunk turned Fernandinho’s cross through goalkeeper Mathew Ryan’s grasp and into his own net.

Brighton boss Chris Hughton said: “For 70 minutes we played the game that we had to play.

“When you’re up against the quality that they’ve got – they have designs on Champions League; ours is to stay in this division next season.

“For 70 minutes we kept them to minimal good chances. But probably the first moment you allow yourselves to get really stretched as a team they capitalised. That’s the quality that they’ve got.”

Hughton, who will assess Chelsea loanee Izzy Brown’s hamstring injury on Sunday, bemoaned his side relinquishing possession too easily, but felt there were “more positives than negatives”.

The match marked quite a journey for Albion, 20 years after facing extinction and following a 34-year absence from the top flight.

“Today was very much a club day. This club has a very difficult history in recent years,” Hughton added.

“It’s understandable that for the history of this club and our first game in the Premier League that it was going to be a big occasion. The fact Man City were coming made it even bigger.

“Now it’s about making sure we dust ourselves down. My responsibility is to make sure we’re a Premier League team next season.”