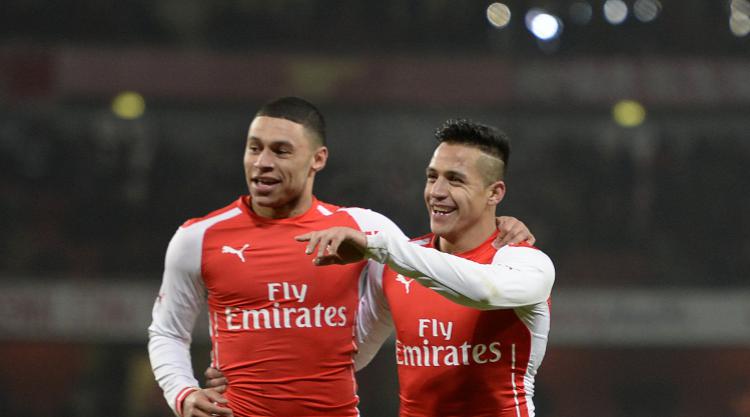 Arsenal have rejected an approach for Alexis Sanchez from Manchester City as Pep Guardiola steps up his pursuit of the Chile forward.

Press Association Sport understands that the Gunners are intent on keeping Sanchez despite strong interest from City, who are widely reported to have tabled a Â£50million offer.

Sanchez has entered the final year of his contract at the Emirates Stadium and Arsenal’s resolve is being tested by their Premier League rivals ahead of Thursday’s transfer deadline.

It is understood that West Brom have agreed a fee to take Arsenal left-back Kieran Gibbs to the Hawthorns, but it is the future of Sanchez and Alex Oxlade-Chamberlain that will really occupy the minds of Gunners fans.

City continue to appear the likely destination should Sanchez depart, while England international Oxlade-Chamberlain has a couple of suitors. According to the BBC, Chelsea have agreed a Â£40million fee with Arsenal for Oxlade-Chamberlain but the 24-year-old has turned down a move to Stamford Bridge as he wants to join Liverpool.

With just two days remaining before the transfer deadline at 11pm BST on Thursday, the pair could yet complete their moves.

Both are out of contract at the end of the season, although manager Arsene Wenger has stressed on several occasions that he wishes for both to remain at Arsenal.

The Frenchman – who has spoken for weeks about the need to trim his squad – is already under pressure after Sunday’s 4-0 loss at Liverpool.

Brazilian defender Gabriel was sold to Valencia last week and, as well as Oxlade-Chamberlain and Sanchez, there are several other players who may leave.

England left-back Gibbs will hold talks with West Brom following reports a move to Watford broke down over personal terms.

Inter Milan target Shkodran Mustafi, along with Jack Wilshere and Mathieu Debuchy, could also be sold or loaned out. Striker Lucas Perez has been told he can leave, but the Spaniard may now remain at the club as a deal with Deportivo La Coruna – his former side and preferred option – is still some way off.

With the future of so many of the current squad still uncertain, Wenger may seek to add new recruits.

West Brom defender Jonny Evans has been mooted as a potential target although it is understood any deal is separate to that which could see Gibbs move to the West Midlands.

An abject performance in losing so heavily at Anfield has already seen pressure begin to build on Wenger – who signed a new two-year deal in May amid protests against his continued reign.

Wenger has said for several months that he would not sell Sanchez in this window and would instead allow the Chilean to walk away for free at the end of his contract, if a new deal cannot be agreed.

He has taken the same stance with Mesut Ozil, whose deal also expires in 2018, although his resolve with the Germany international has not been tested with any bids.

Oxlade-Chamberlain has been at Arsenal since joining from Southampton in 2011 and Wenger said just last week that the 24-year-old will be “one of the big English players in the coming years”.

Despite that, it appears Oxlade-Chamberlain has determined his future lies away from Arsenal.