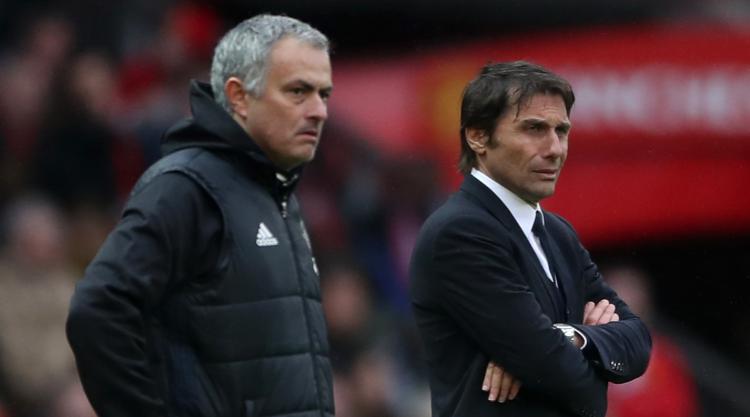 Hope brought by the start of a new season is underpinned by expectation at Stamford Bridge after the Italian led the Blues to the title in his first season at the helm.

Conte’s achievements were all the more impressive given the previous campaign’s atrocious title defence brought Mourinho’s second spell at the Stamford Bridge halt to an unceremonious halt.

But things appear to have gone awry at the start of the current Chelsea manager’s second season, with Costa still on their books, the squad looking patchy in places and a season-opening 3-2 home loss to Burnley.

Things do not get any easier as they head to Wembley to face rivals Tottenham on Sunday, but Manchester United manager Mourinho – who saw his side thrash West Ham 4-0 on the opening weekend – says Conte’s side remain the side to beat.

“For me the favourite is the champion – always,” the United boss said ahead of the trip to Swansea.

“Because for some reason was the champion.

“It doesn’t mean you are going to win it but I think it is the stamp that you have when you are champion, it is that the next season you are the favourite.”

The subject of the Premier League favourite stemmed from Mourinho scoffing at the suggestion United were in a more stable position than their rivals.

Some have large question marks over key players and others still need key reinforcements, but the Portuguese says they are not the “dream team” after beating West Ham nor does their relative stability mean they have an advantage.

“They have very good teams, very good players and I don’t see any reason for them not to be fighting for the title.

“When people say, for example, Chelsea lost an important midfield player, you know if you lose one but you buy (Tiemoue) Bakayoko and (Danny) Drinkwater for example, what’s the problem?

“You are probably even stronger, so I think every top team in the Premier League is strong enough, with potential is strong enough with the financial situation to be fighting for everything.

“And when everybody is also in Europe – five in the Champions League and then two in the Europa League – you have the top seven teams playing for everything and all of them are strong.”

Drinkwater remains a Leicester player but reports of a move to Stamford Bridge have bubbled along over recent weeks.

Such talk is common as the transfer window comes to a close and sees players like Anthony Martial continue to be linked with a move, despite scoring one and assisting another as a substitute against West Ham.

Tottenham have again been linked with the Frenchman, who found chances hard to come by last season due to Mourinho’s well-documented frustrations with the attacker.

However, the United boss suggests Martial has turned over a new leaf at the start of a season he expects to face without the wide man acquisition he craves.

“I have faith in him,” Mourinho said of the France international.

“Probably the player that I was looking for was not a pure winger because I have pure wingers.

“Probably the player I was looking for is a player that allows me to play with three in the back and do the wing-back.

“Because as a pure attacking player, Anthony is a good player.

“I believe he’s one of the players that is going to have a better season this season than the previous season. I believe.

“I look at some of my players and I am sure that some of them will be better this season than they were last season, and Anthony is that for sure.”