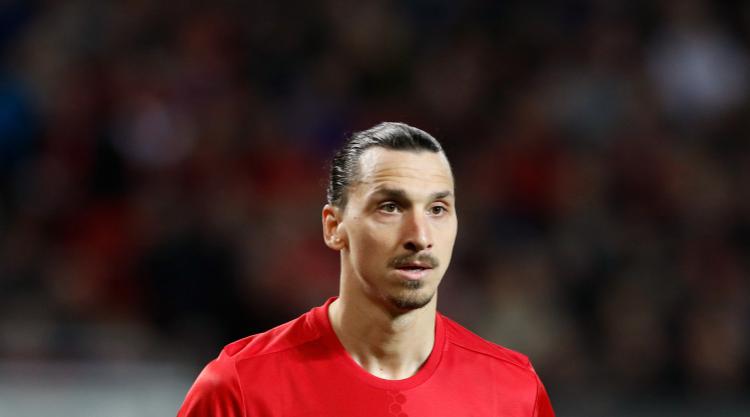 Jose Mourinho has not closed the door on a new deal for Zlatan Ibrahimovic or a move for Chelsea’s Nemanja Matic, admitting Manchester United’s summer business is only 50 per cent complete.

Significant knee ligament damage brought Ibrahimovic’s outstanding first campaign at Old Trafford to an abrupt halt in April, with the Swede released at the end of his one-year deal.

It was little surprise given the 35-year-old’s huge wages and inability to play until next year, but the striker has stayed on at United to do his rehabilitation and could yet have a future at the club.

The Los Angeles Galaxy – United’s opponents when they kick-off their pre-season tour on Saturday – have long been linked with a move for the well-travelled forward, with a Â£6million-a-year deal reported to be on the table.

However, United boss Mourinho is keeping a keen eye on Ibrahimovic’s recovery and admits a new deal at Old Trafford could be on the cards.

“Possible, it’s open,” Mourinho said when asked if there was a chance Ibrahimovic could sign a new deal.

“Of course we wanted to be honest and open and let everything for him to make the decision in case his desire was to leave, so there was not a new contract.

“There was a space of time for everybody to think, to feel, to decide and from his point of view he made the decision of wanting to play football still at the highest level, didn’t want to hide behind such an amazing injury.

“It would be easy for him to hide behind it and to say ‘it’s time stop and go to a different level of football’. He did not want that.

“He was not happy with the way he finished the season. Of course with his first European trophy but not playing and he made the challenge for himself of wanting to keep playing at the highest level.

“At the same time, let’s make a decision that makes us all happy and if that decision is for him to stay and for us to wait, let’s say until December maybe because I don’t think before December he can be back to competitive football.

“But why not for us to wait for such a good player that gave us so much?

“So we’re speaking, we are changing ideas and again it’s in the hands of (executive vice-chairman Ed) Woodward and Zlatan’s agent, but the important thing is that the final decision is the best for the player.”

Ibrahimovic’s knee injury saw United prioritise the acquisition of a new striker, with Romelu Lukaku this week filling that void after arriving from Everton for an initial Â£75million.

Benfica defender Victor Lindelof has also bolstered the squad, but the intention all along has been to make four top-quality signings this summer.

Inter Milan’s Ivan Perisic, Tottenham defensive midfielder Eric Dier and Chelsea’s Matic have all been linked with a move to Old Trafford.

Press Association Sport understands it is likely that Matic will miss Chelsea’s pre-season tour to Asia amid such talk, but Mourinho would not be drawn on his former player – only his summer intentions.

“I can’t say any word about a player that is a Chelsea player,” the United boss said at their UCLA training base. “I can’t.

“It’s difficult. It was a little bit the same with (Alvaro) Morata. Matic is a Chelsea player and we have to respect the player, the club, the owner, the manager.

“I don’t want to be disrespectful and be speaking about the player.

“We don’t have our door closed, we are not happy with just Lukaku and Lindelof.

“We need more. We wanted four so I would say 50 per cent of the job done, but I don’t want to say that, because everything is so difficult that I wouldn’t like to be in (executive vice-chairman) Ed Woodward’s position negotiating.

“So maybe we don’t get two, maybe we get one, but at least we need one player to give us a little bit more options.

“The squad needs that balance. We have players that belong to the squad, but they cannot play football for the next three, four months: Marcos Rojo, Ashley Young, Luke Shaw, if Zlatan stays.

“We have three or four players that only by the end of the year they can be back to football, so we need two more players I would say.

“At least one, but I don’t want to say Matic or any other name, because I don’t think it’s correct to do it.”

Mourinho did, though, confirm that United had been looking to buy Real Madrid striker Morata, who is now training just metres away from what could have been his new team-mates at UCLA.

“I don’t like to speak about players who aren’t ours, because Morata is not our player,” the United boss said.

“I am nobody to speak about players from Real Madrid. Yes, we have had interest, that is obvious and it’s public.

“We have not come to an economic agreement, that is obvious as well. But it’s Real Madrid’s right to ask for their players the amount of money that they want.

“We do not determine what the price is of a player of Real Madrid, Real Madrid do that.

“And we didn’t arrive at an agreement with Real Madrid.