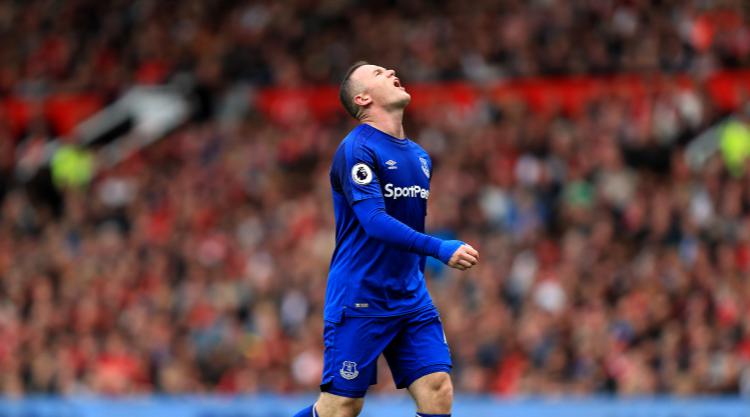 The build-up to Sunday’s encounter revolved around the return of United’s all-time top scorer for the first time since rejoining his boyhood club in the summer after 13 successful years in red.

Rooney was given a warm welcome at Old Trafford and left to a standing ovation, but it was Valencia that got fans on their feet as an outstanding half-volley kicked-off a United win that ended 4-0 thanks to late goals by Henrikh Mkhitaryan, Romelu Lukaku and Anthony Martial.

Ronald Koeman has some serious questions to answer after Everton’s fourth straight loss in all competitions – an outcome that looked likely within four minutes as Valencia met Nemanja Matic’s cross with a stunning effort.

Lukaku wasted a glorious chance and Juan Mata hit the post as United attempted to ward off the visitors’ threat, with Rooney’s 82nd-minute substitution – the day before facing a drink drive charge at Stockport Magistrates’ Court – followed by a trio of late goals.

Mkhitaryan slotted home within seconds of Rooney’s departure and then Lukaku fired home against his former club before Martial’s stoppage-time penalty wrapped up a comprehensive victory.

It was quite the end to a match that started with an emphatic finish.

When Matic sent a sweeping pass across the 18-yard box, few expected to see Valencia meet it with the outside of his boot – a half-volley that flew past Jordan Pickford in front of the elated Stretford End.

It was a strike of outstanding quality and allowed United to dictate the agenda, with Everton struggling to break through the lines and create a clear-cut chance until the 21st minute.

Rooney hit a low, first-time shot across the face of goal on a sweeping attack that highlighted the Toffees’ growing presence in a game that should have got away from them after a Michael Keane mistake.

The United academy graduate’s wayward pass was cut out by Mata, who put Lukaku through on goal only for the striker to somehow put wide of his former club’s goal.

Home celebrations turned to embarrassment when it clicked that Lukaku had missed the target, with the travelling support quickly going through a similar swing in emotions as Gylfi Sigurdsson slotted home unaware Tom Davies had been called offside.

Pickford had to be alert as United pushed as half-time approached, but within a minute of restart it was opposite number David De Gea in action as tenacious Rooney won the ball off Eric Bailly and got away a close-range effort.

The United goalkeeper stood tall to deny Sigurdsson as the men in blue pushed for a leveller and the atmosphere Mourinho called for in his programme notes began to wane.

Mata raised the noise a few notches by sending a free-kick off the post, while Jesse Lingard, on for the ineffective Marcus Rashford, was proving a handful as United looked to put the match to bed.

Matic came close from distance before Lingard’s penalty claims were waved away, with Rooney then leaving to a standing ovation from the Old Trafford faithful.

The final eight minutes made uncomfortable viewing for Rooney on the Everton bench.

Mkhitaryan swept a low shot past Pickford after being put through by Lukaku, who was cheered by the travelling support after hitting a free-kick into the wall. However, the former Everton striker continued into the box and fired home, cupping his ears to the fans that once adored him.

Sandro Ramirez’s attempt at a consolation was well stopped by De Gea and things would soon get worse for Everton.