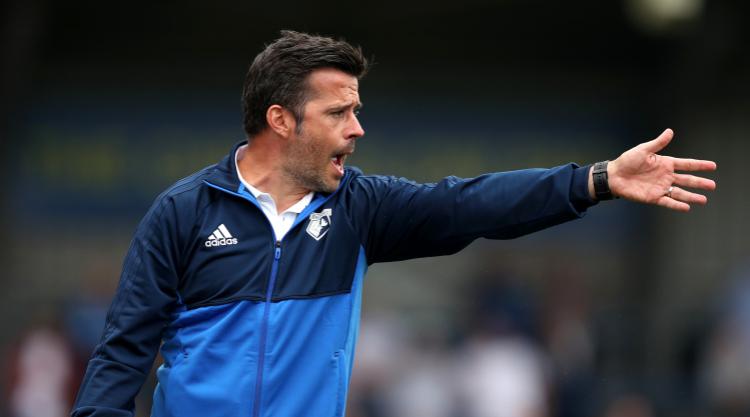 Marco Silva is confident he can survive the managerial graveyard at Watford.

The 40-year-old Portuguese was this summer appointed as the ninth Hornets head coach in the five years since the Pozzo family took over the club.

The previous two incumbents lasted just one season, despite both Quique Sanchez Flores and Walter Mazzarri comfortably keeping them in the Premier League.

But Silva, who resigned from Hull after they were relegated last season, has signed a two-year contract and is not fazed by working for such apparently trigger-happy owners.

“I believe it is a project for two years, and the club signed the contract because they believe we have the right technical staff to stay here and improve their club,” he said.

“The most important thing is what I will do day by day, game by game, to improve every day my competence and the competence of my team. That is most important, not to talk about my contract.

“I don’t want to talk about the past. I respect the other managers who did a good job here. The club decide what they decide and I’m not the right person to talk about that.

“Our target is clear, we need to prove we are a Premier League club, and then the ambition is to do something better than the last two years.”

A feature of Mazzarri’s spell in charge was his failure to learn English – he spoke to the media through a translator and to his staff in Italian.

Silva’s grasp of the language is impressive, by contrast, and he will insist on English being spoken among his staff and players on the training pitch.

Talking to the media for the first time since his appointment, the former Olympiakos and Sporting Lisbon coach added: “Will the players be speaking only in English? Yes.

“The main language is English. I’ve come here to speak English. Normally I talk in front of everyone in English.

“Sometimes I need to speak to Spanish players a bit in Spanish – but that is not perfect.”

Silva is likely to be busy on the phone over the next few weeks as he attempts to add further reinforcements to a squad which eventually finished 17th.

But he did have time to receive one customary call from the club’s most famous fan, life president Sir Elton John.

“He’s an amazing person, and I hope he will come here for the first match against Liverpool,” said Silva.

“What did he say? Normal things like ‘good luck, you are a fantastic manager.’ But he says that for every one!”