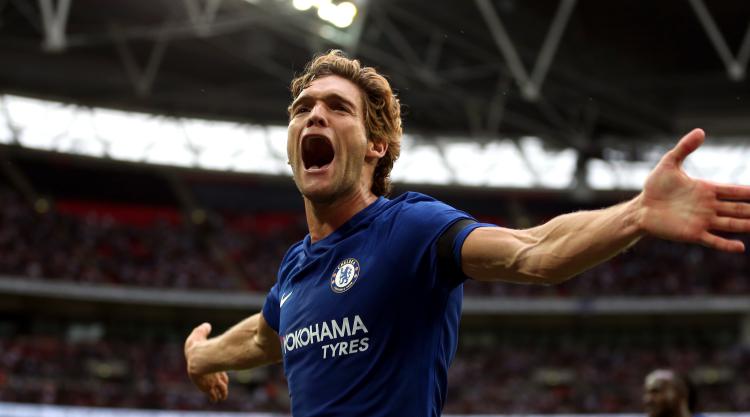 Chelsea responded to the humiliating start to their title defence by extending Tottenham’s Wembley woe with a 2-1 victory in the first Premier League clash at the national stadium.

Marcos Alonso scored twice for the visitors as Antonio Conte’s men, crowned champions in May, recovered from their opening home loss to Burnley.

Alonso’s first-half free-kick was cancelled out by Michy Batshuayi’s own goal eight minutes from time.

But Chelsea were not finished and Alonso struck again to finish off Spurs, whose record since Wembley reopened in 2007 reads: played 11, won two, drawn one and lost eight.

After a challenging summer at Chelsea – taking in Diego Costa’s exile, a shrinking squad and manager Conte belatedly signing an improved contract, but not an extension – it was a welcome fillip for the Blues.

Willian also struck a post for Chelsea, which Harry Kane did for Spurs, who laid siege to the visitors’ goal but perhaps were fortunate to finish the game with 11 players.

Eric Dier and Jan Vertonghen were only booked for high challenges.

Gary Cahill received a straight red card for similar against Burnley in a defeat which left Chelsea fearful of losing their opening two league games for the first time since 1973-74.

But their record at the new Wembley was two wins from 10 games – one in nine since the 2008 League Cup defeat of Chelsea – ahead of their debut as domestic tenants here.

Spurs had a near full-strength line-up, with Kieran Trippier fit at right-back.

Chelsea’s stretched resources, with Cahill and Cesc Fabregas suspended, saw David Luiz start in midfield. He did not look out of place.

Alongside him was Tiemoue Bakayoko, who was making a belated debut after signing from Monaco while carrying a knee injury, while Andreas Christensen made a first Premier League start in defence. Both also performed well.

Alvaro Morata was starting for the first time, too, and missed a gilt-edged opportunity to put Chelsea in front inside five minutes, heading wide from Cesar Azpilicueta’s cross.

The Spain striker was unmarked, six yards out. And some in Chelsea blue would immediately have thought of the exiled Costa.

Kane, who attracted understandable admiration from Conte this summer, turned and shot at Thibaut Courtois, who gathered at the second attempt.

Morata next closed down Hugo Lloris. The goalkeeper’s clearance struck Morata, but bounced in Lloris’ favour.

Dele Alli volleyed over from an acute angle after Christensen allowed the ball to bounce in the box.

The excellent Mousa Dembele then shimmied by Luiz and his shot was helped over by Courtois.

Dier caught Luiz on the ankle before the Chelsea man was then booked for an off-the-ball foul on Christian Eriksen.

Eriksen’s fine free-kick into the six-yard box evaded everyone, including Morata – Chelsea’s nearest player – and Kane as he tried to reach the ball with an outstretched leg.

Kane came closer still after combining with Alli. He checked inside Christensen and struck the ball against the foot of a post.

Spurs pushed for an equaliser and came close when Kane only glanced a header from a corner. Firmer contact would have resulted in a goal.

Chelsea had chances for a second. Morata was played through on goal by Willian and cut inside Toby Alderweireld before Vertonghen’s covering block.

Moses fired over and then Willian made space for a shot which rebounded off the far post.

Chelsea’s near misses proved costly when Bakayoko was adjudged to have fouled Alli. Eriksen’s cross was headed in by Batshuayi, without any pressure from a Spurs player.

But Chelsea were not finished and, after Batshuayi could not pounce, Victor Wanyama gave the ball away and Alonso shot under Lloris at the near post for the winner.