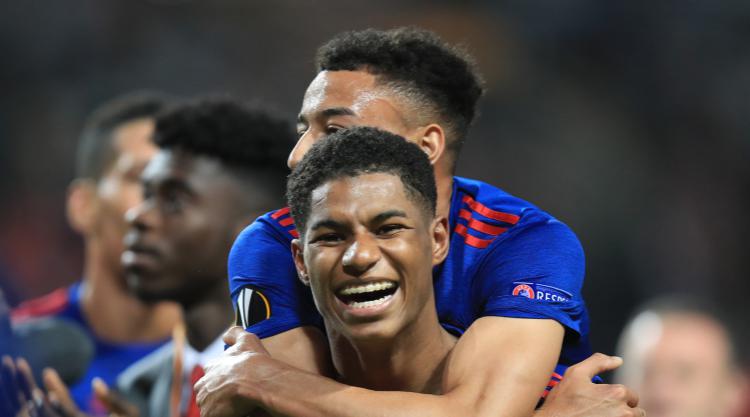 Manchester United forward Marcus Rashford is not only growing as a player but in stature too, having bulked up and sprouted three centimetres over the past year.

The 19-year-old has squeezed a lot into a short space of time, having won the FA Cup, League Cup and Europa League since making his remarkable debut 507 days ago.

Rashford, who is also an England regular, continues to improve apace and, despite his goal tally dipping last term, United manager Jose Mourinho is understandably excited by the player’s potential.

The striker certainly looked sharp when netting a brace in Saturday’s 5-2 friendly win against the Los Angeles Galaxy and is now a far more imposing presence than the player that burst onto the scene.

“It’s just the natural evolution of a kid,” Mourinho said. “Accumulation of minutes on the pitch and you change your body when you’re a young kid so that’s absolutely normal.

“He’s already taller than when I arrived 13 months ago, he’s three centimetres taller, and obviously he put on some muscle, but without any kind of specific work because his speed is the most important quality so we don’t want to lose that.

“Today he was in a different team than (Romelu) Lukaku. In this pre-season we will also try both in the same team which I think can also work.”

Playing big-money signing Lukaku alongside Rashford is a tantalising proposition, especially given the fact Mourinho expects the 19-year-old to find the net with more regularity this term.

“Last season in this period everybody was saying that with me it would be difficult for him to play,” the United boss said.

“In the end, I think he was one of the top three with more appearances for the team so he played a lot, he developed a lot. He played in different positions, which is good for his evolution.

“He played the important Europa League matches, which is like a pre-Champions League, and he’s learning a lot.

“He is a great professional with a great attitude and last season for too long he was in a period of not scoring goals and missing a lot of chances, which was not a drama because sometimes that’s part of the evolution.

“We knew that this season he is going to score more goals than last season.”

The competition provided by Lukaku should help fuel Rashford’s development, just as Zlatan Ibrahimovic and Wayne Rooney did for the youngster last season.

The latter’s exit saw Michael Carrick this week confirmed as United captain, although at the age of 35 others will have to wear the armband at times this season.

“We don’t have a vice-captain, a captain is enough,” Mourinho said.

“I don’t like a lot the criteria of the captain to be a player with more time at the club because sometimes you have somebody with the armband that doesn’t have the qualities to be the captain and is just the captain because he arrived before other players.

“Michael will be the captain for one year, maybe two if he decides to do that and his body resists the demands of the Premier League and Champions League.

“But for this season. only one captain.”