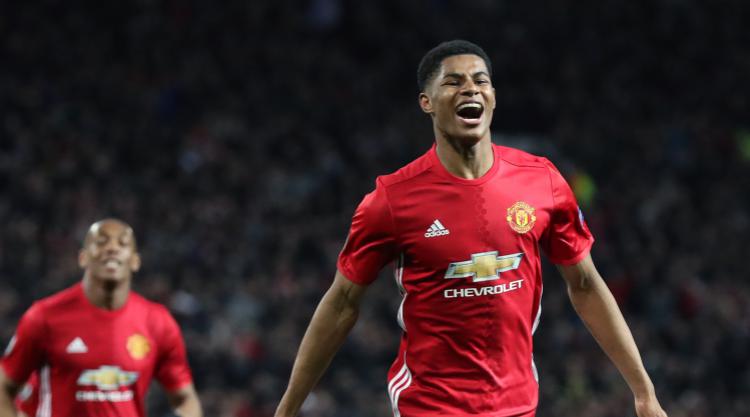 Marcus Rashford struck twice as Manchester United’s pre-season tour got off to a comfortable start, with Romelu Lukaku and Victor Lindelof making their first appearances in a comprehensive defeat of the Los Angeles Galaxy.

After five gruelling days of double-sessions in the Californian sunshine, Saturday evening brought the chance to blow away the cobwebs at a sold-out StubHub Center.

David Beckham was among those in attendance on a night that United bossed from the outset. Mourinho named a different line-up in each half, with Marouane Fellaini complementing a Rashford brace in the first period before Henrikh Mkhitaryan and Anthony Martial scored in a 5-2 friendly win.

Giovani dos Santos scored two late consolation goals but that could not take the gloss off a promising start to pre-season against a Galaxy side in the midst of a testing Major League Soccer campaign.

Mourinho interestingly plumped for a three-man defence in Carson, where this run-of-the-mill friendly came with a dollop of American razzmatazz.

Fireworks were followed by ticker tape at the kick-off – paper that was still floating to the ground when Jesse Lingard snatched possession, allowing Rashford to finish smartly after 115 seconds.

There was no let up as Rashford had another attempt and Juan Mata tried an unorthodox effort, before the pair combined for a 20th-minute goal.

The Spain international played through the sharp-looking striker, who showed no little composure and skill to slot past Jon Kempin.

The Galaxy’s second-string were being toyed with and Fellaini soon got in on the act, firing home after a smart cutback from Lingard.

Chris Smalling was ruled offside after tapping home just before the break, which Rashford would have entered with the match ball secure had he not wasted a one-on-one.

An entirely new line-up trotted out for the second half, including summer signings Lukaku and Lindelof.

The latter had two early attempts but the Galaxy’s half-time changes strengthened them markedly, with Ashley Cole among those brought on – a change welcomed by jeers from those clad in red.

United again began to turn the screw, though, and Mkhitaryan swept home a Martial pass in the 67th minute.

It was five soon after as Paul Pogba played a lovely ball to Tim Fosu-Mensah, whose cutback was turned home by Martial.

Dos Santos netted two late goals – cutting all too easily past Lindelof for the first before a fortunate deflection – as the pre-season tour got off to a straightforward start.