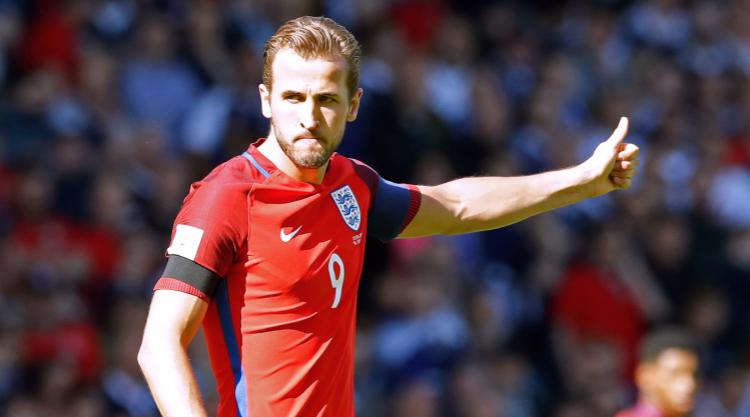 The 24-year-old has previously worn the armband for the Three Lions as manager Gareth Southgate has rotated his captain since Wayne Rooney was left out of the squad.

The Everton forward has now retired from international football, leaving a void of experience.

It remains to be seen if Southgate will install a permanent captain, having utilised Kane, Joe Hart and Jordan Henderson in the role in recent games.

Kane has led out England in their last two matches, scoring three goals in that time, and his boss at Spurs reckons he can be relied on to take the role again.

Asked if Kane was ready to be captain, Pochettino replied: “Yes, but that is not my decision.

“It is Gareth Southgate’s decision. But I think Harry Kane is ready and his character is fantastic to be a captain.

“It is not my decision but if that happened, I would be very happy if the decision of Gareth Southgate were to give the armband to Harry.”

Kane, who has still never scored a Premier League goal in the month of August, will have another chance to end that hoodoo when Spurs host Burnley at Wembley on Sunday.

Pochettino will be hoping to have new club-record signing Davinson Sanchez involved but admits it all depends on how quickly a work permit can be issued for the Colombia international.

“The work permit, we are waiting,” he said when asked about the former Ajax defender.

“We will see if he is available to be selected for the weekend. At the moment, we will see.

“In the last week he was not involved in training for Ajax. Always difficult for him.

“He trained with us yesterday and will train with us again. We are waiting for the work permit so we have to wait.

“For me, the important thing is that he is so young – 21 years old. He is one of the most important and talented young players in Europe. He is so fast. We are so pleased to sign him and have him with us.”

Pochettino also signed goalkeeper Paulo Gazzaniga from Southampton during the week as Spurs finally started to land players having not brought in any new faces in time for the start of the season.

They have been heavily linked with Paris St Germain full-back Serge Aurier in recent days and Pochettino admits there could be as many as three further additions before the transfer window closes on August 31.

“I am confident. We are working hard to change the squad and bring more players in. From our chairman Daniel (Levy) and Steve (Hitchen) our chief scout, trying to find the right profile.

“We are working hard to strengthen our squad. I think it is so exciting now ahead of the Champions League and Premier League.

“We need to sign a few more players and a few players need to leave the club. They need to feel they can play more and they want to play more. That is a normal period in every club.”