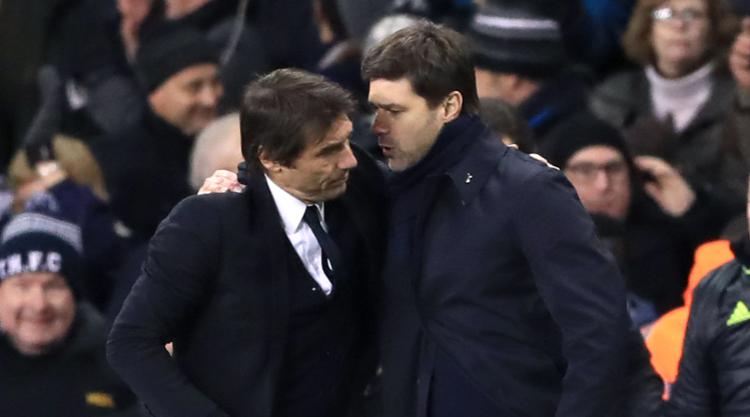 Tottenham boss Mauricio Pochettino has revealed Chelsea counterpart Antonio Conte sought him out to explain negative media comments he made about Spurs during the summer.

Conte takes his reigning Premier League champions to face Spurs at Wembley on Sunday as Pochettino’s side look to start their season away from White Hart Lane with a London derby victory.

During pre-season Conte questioned the ambition of Tottenham, given they had not signed any new players at that stage, but Spurs’ first arrival of the transfer window came on Friday in the shape of Ajax defender Davinson Sanchez.

The Italian also said it is “not a tragedy” if Spurs do not win the title or qualify for the Champions League – whereas it is for the likes of Chelsea, Arsenal, Manchester United and Manchester City.

But Pochettino said that Conte approached him at the recent Premier League launch event to make clear what he had meant by his statements.

“Last week, we had (an) opportunity to talk a little bit and he was very clear with me,” the Spurs boss revealed.

“I respect him and Chelsea and it’s time to play and show we are better. It’s always a challenge to play the champions.”

Asked to go into more detail about the conversation, Pochettino would not reveal what was said but felt Conte explained the situation well.

“We spoke at the Premier League launch last week,” he said.

“He did not apologise, he just tried to explain things to me. It is one thing how he relates things to you, it is another how you perceive the message and translate it to the fans.

“Sometimes the difference is important, and he wanted to try to explain what it was that he had wanted to say. It was different to how you had explained it to the fans, and I got his message direct.

“I understood it when he explained to me. What he said did not upset me, it is only that he wanted to be sure that I had got the right message, not the wrong message. For me it is not a big issue.

“Every manager has a right to say in the media what they want. For me, it is not my job to judge what they want to say or how they give their opinion. I don’t believe he wanted to be disrespectful to Spurs or myself.

“Conversation is good. We are colleagues and I think showing respect is important. In the Premier League we talk about fair play and everything, so it is important to show as the manager, we are being responsible every week in front of the media.”

Tottenham host Chelsea in the first-ever Premier League game to be played at Wembley as their new stadium on the site of White Hart Lane is completed.

They have won just one of their last nine games at the national stadium, losing three matches to Chelsea in that time.

While the Blues are facing a number of issues – including Diego Costa’s unrest, Conte’s unease at the size of his squad and a shock opening weekend home defeat to Burnley – Pochettino knows they are still a major threat.

“It is true that Costa is not here but it is Alvaro Morata, Michy Batshuayi and I think that they have signed players and the quality of the squad is very good,” he added.

“It is true that last week they had a problem but in football always the next game will be different and complicated and tough.

“The most important thing is to be focused on us and if they play with a back three or four or five, two midfielders or one, two or three strikers – that is their problem.

“For us, it is to be sure that we need to improve every week and show our best quality to try and win because we are going to play against the last Premier League champions.”