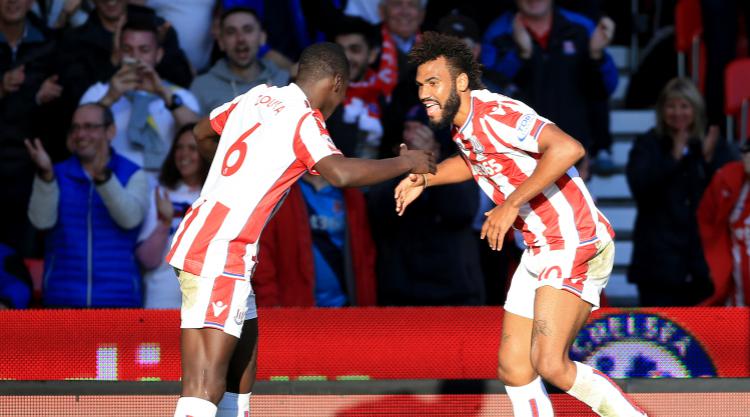 Three wins, 10 goals and a hat-trick of clean sheets had given the Old Trafford giants a strong start to the season, yet City boss Mark Hughes spoke of weaknesses in his former club’s armoury ahead of Saturday evening’s encounter.

Choupo-Moting gave credence to his manager’s claim during an entertaining 2-2 draw at the bet365 Stadium, where Stoke’s summer signing opened the scoring and would later secure a point after Marcus Rashford and Romelu Lukaku scored for table-topping United.

Hughes’ well-drilled side took great pride in ending the Premier League’s last remaining 100 per cent record – and the City boss clearly got under Mourinho’s skin as no full-time handshake was forthcoming.

The pair’s duel on the touchline was as entertaining at times as the match itself, with Choupo-Moting punishing Eric Bailly’s listless defending to put Stoke ahead.

United produced a response as impressive as it was swift after seeing their goal breached for the first time this campaign, with Paul Pogba’s header off Rashford followed by Lukaku putting his side on course for victory.

Victory would prove beyond Mourinho’s men, though, as a sensational David De Gea stop brought a corner from which Choupo-Moting lost Phil Jones to head home.

The former Schalke forward was involved from the outset at the bet365 Stadium, where Rashford led a United surge and Jese Rodriguez dragged wide during a cracking start.

However, the impressive atmosphere and intensity did not translate into clear-cut early opportunities as both teams stood firm defensively.

As the first half wore on, United’s confident attack began to find gaps and Rashford, a handful up front, twice tested Butland in quick succession.

Having only had to deny an offside Lukaku attempt up until the 24th minute, the Stoke goalkeeper produced an unorthodox if effective stop to deny United’s teenager before then clawing away his bending, low effort.

Kurt Zouma sent an Antonio Valencia cross whistling past his own goal as United pushed for an opener that, against the run of play, would arrive at the other end.

Aside from De Gea thwarting two long-range efforts from Xherdan Shaqiri, he had little to do until a passage of defensive naivety from Bailly.

After playing Mame Biram Diouf onside, the Ivorian centre-back was outmuscled by Choupo-Moting as the summer signing directed the resulting cross past De Gea from close range.

Mourinho will no doubt be proud of his players manful response to that 43rd-minute setback, though.

Entering first-half stoppage time, Henrikh Mkhitaryan’s corner was flicked on by Nemanja Matic and headed goalwards by Pogba, taking a slight touch off Rashford on its way home.

The second period, much like the first, began at a frantic tempo with defences on top, until Matteo Darmian picked Joe Allen’s pocket in the 57th minute.

The full-back burst down the left and played inside to Mkhitaryan, whose deft clipped pass put Lukaku through. Butland stood strong to deny the Belgian’s first attempt, but he stretched to fire home at the second attempt to the delight of United’s 3,000 travelling fans.

The visitors’ joy would prove short-lived. De Gea produced an exceptional one-handed save to deny Jese, only to see Choupo-Moting lose Jones from the following corner as the Stoke forward’s header flew home.

Valencia wriggled free to fizz just wide and Shaqiri tried his luck directly from a corner as the end-to-end flow continued, with Lukaku somehow missing the target from substitute Anthony Martial’s fine cross.

Butland produced an exceptional reaction stop to prevent Zouma scoring an own goal in stoppage time, before Pogba hooked over a hopeful attempt.

The main talking point after the match was Hughes and Mourinho. The pair had jostled in the second period and did not shake hands at the end.