A father and son have been killed after a deep sinkhole swallowed their car on a major Mexican road.

Rescuers reached the rubble-covered Volkswagen Jetta lying on its roof at the bottom of the hole after working for more than eight hours on the closed section of road.

The sinkhole appeared around 6am yesterday local time. A crane lowered rescuers into a yawning hole the width of two lanes in the middle of the highway.

The initial hole was widened in order to build a ramp for recovery purposes. 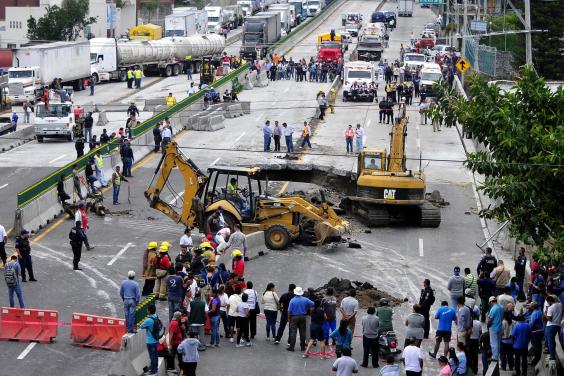 The aftermath of the sinkhole in Mexico (AP)

Gerardo Ruiz Esparza, secretary of the federal Transportation Department, said the sinkhole was apparently caused by the erosion of a drain that runs more than 50ft (15m) beneath the road.

At a news conference at the site, Mr Esparza blamed heavy rains during the past three days for the hole on the Mexico-Cuernavaca highway, the main route connecting the capital to the Pacific coast resort city of Acapulco.