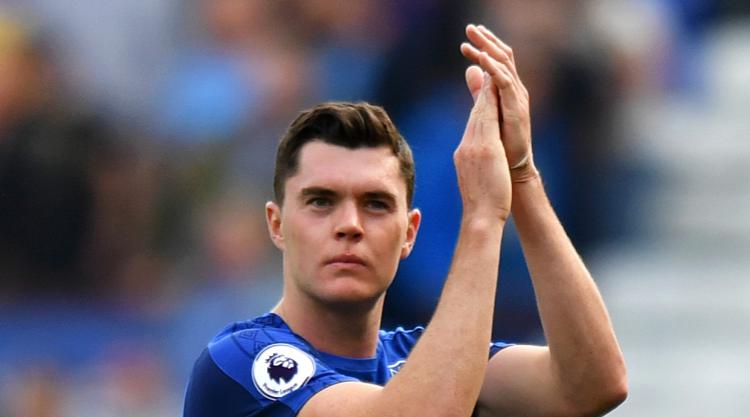 England defender Michael Keane believes he is already growing as a player under the watchful eye of Everton boss Ronald Koeman.

Keane made the Â£25million switch from Burnley to Goodison Park in the summer and revealed former Barcelona and Holland centre-back Koeman is encouraging him to become a more expansive player.

At Turf Moor he honed the bread-and-butter business of defending and the Manchester United graduate has welcomed the opportunity to learn at Koeman’s side.

“At Burnley it was all about defending, which I loved, and I improved a lot when I was there but it’s just a different style of play,” he said of life on Merseyside.

“You’ve still got to do that at Everton, it’s the basics of being a defender, but also have to play out from the back a bit more. Ronald is trying to bring that out of my game and develop me in that sense. He was more of a ball player and scored a lot of goals.

“He won’t talk to me every day but when he does he’s got a lot of authority and you take it, you listen.

“Every now and again he’ll pull me into his office, show me a few clips of what he likes his centre-halves to do. That’s all I can ask for, it’s one of the reasons I went there, because he played at the top level, he’s got a lot of experience and hopefully he can keep passing that on.”

Keane is just two caps into his international career but cannot help cast an eye towards next year’s World Cup in Russia.

The 24-year-old made a favourable impression against Germany and Lithuania in March and is angling for another chance to impress in Malta on Friday.

“It’s always going to be there in the back of your mind, it’s a dream to go to a World Cup with England,” he said.

“Obviously it’s a massive year coming up and you want to put yourself in the manager’s plans as much as possible.

“Hopefully we get two good performances and two wins. If we do that we’ve almost got one foot in that World Cup. It’s a big week for us and can’t wait for the games.”

Keane also paid tribute to Everton team-mate Wayne Rooney, who he first came across while in United’s youth set-up, following his international retirement.

“He’s been an inspiration really, a leader off the pitch and on the pitch and all you can say is thanks for everything he’s done.”